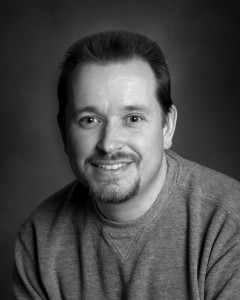 As a former resident of the Tinsletown, Troy Cook worked as a child actor and eventually went to work as a cameraman and then movie director. He wrote and directed movies for fifteen years and his work took him all over the world, including crime-ridden Russia.

Loveland, Colorado is a long way from the bright lights of Hollywood and on most days, Cook prefers it that way. However, his past experiences in the film industry serve him well in his new profession as an author.

After leaving California, ten years ago, Cook started a house painting company in Loveland, but he soon began to miss his creative side. About five years ago he decided to write a novel. “I’d always wanted to give it a try, and it has worked out pretty good so far,” said Cook.

“Screenplays are about one-third the length of a novel. Novels are a lot more intricate. I studied up on how to do what I wanted to do and then I started thinking about the things I like when I’m reading,” explained Cook. “I like things that make me laugh and that is why I wrote a book with a lot of humor in it, but I also wanted it to be a genre-type piece so it was accessible to the most amount of people.”

Cook wanted to write mystery novels about criminals because, “they [criminals] are humorous by nature – often they are stupid and the things they do often lends itself to nature humor in the story.” But this wasn’t the only reason Cook decided to write about criminals, he has first-hand experience with the criminal world. As it turns out the movie business is a good way to launder money and during his years in the movie industry, Cook brushed shoulders with more than a few mafia-types, inside and outside of the United States.

With his ambition in sync with a plan of attack, Cook wrote his first book, “47 Rules of Highly Effective Bank Robbers.” It went on to receive critical acclaim and numerous book award nominations and wins, including the #1 “Killer Pick” by the Independent Mystery Book Seller’s Assn., and a Silver Evvy Award. Publishers Weekly called the book, “An Indie Surprise,” and Library Journal’s review read, “A literary jewel. Don’t miss it.”

The success, however, of Cook’s first book wasn’t just good luck. “A lot of authors think I’m very lucky, and I am lucky, but I also work really hard to get my books out to the right places,” said Cook. “Luck does play a part, but working hard to spread the word makes it possible for that luck to happen, or at least make it a lot more likely.” 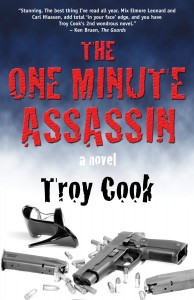 As soon as Cook’s first book hit stores, he hit the pavement. On his first book tour, he visited 100 bookstores across the country. When his second book, “The One Minute Assassin,” was published in September 2007, Cook didn’t slow his marketing campaign. He has now visited over 200 bookstores, and he attends book and author conventions across the country. He also enjoys giving presentations to local book clubs and writer groups.

Cook considers his job as a writer an artistic and business venture. “It is a business. It’s similar to the movie business. They don’t make a creative motion picture to have it not make money. They always want it to make money. So you have to marry the interesting creative ideas with stuff people want to see. It has to be something people want to see, want to read, want to hear, depending on whatever art you are doing – if you want it to be successful you must marry the two,” said Cook.

All of Cook’s book titles have been inspired by the title of a famous business book titles. “It’s a hook. It’s the same thing we’d do on movie posters, a tagline to make people interested to see the movie. So I was thinking of this from a marketing standpoint,” explained Cook.

From 90-year-old grannies to 13-year-old boys, Cook’s books appeal to a wide audience. His first book has been translated into several languages, though Cook has no idea if the humor in his stories translates well to a foreign audience. While attending a mystery convention this past year, Cook was approached by a Japanese fan clutching the Japanese version of “47 Rules.” It was the first time Cook had gotten the opportunity to see a translated version of his book. “It was a real treat for me,” stated Cook.

Perhaps the most exciting development in Cook’s career as a novelist has just become public. “I’ve had some success in movie companies interested in my novels. Not from my old contacts in the business because I’ve been out of that for ten years. I think because I write in a way that helps people visualize the story it helps Hollywood visualize the story too. So I was lucky enough to have several companies want the rights to the first novel,” said Cook.

"The Day the Earth Stood Still"
My favorite Christmas movies