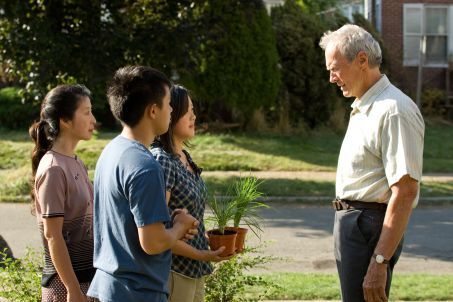 Word of Warning: Language, racial slurs and violence – this one’s not for the kiddos or the easily offended.

Written, directed and starring an icon of our time, Clint Eastwood, “Gran Torino is one of the best movies of 2008 (it was in limited release during December, widely released in January). Clint Eastwood plays Walt Kowalski, a veteran of the Korean War and retiree from Ford Motors, living in the suburbs of Detroit, Michigan.

Kowalski is a hard-as-nails, work-a-day man, who is emotionally distant from his two sons and their families. His wife has recently passed away and the neighborhood they have lived in for years has changed dramatically. His neighbors now represent various cultures, much different than his own and for the cantankerous, and at times, racist, Kowalski, it is almost more than he can take.

A conflict arises between Kowalski and his Hmong neighbors (many Hmong people fled to the United States from Vietnam, Thailand and Laos immediately after the Vietnam War). However, the conflict results in Kowalski inadvertently becoming involved in the lives of the two Hmong young people, brother and sister, Tao and Sue.

When a local gang begins relentlessly harassing Tao and Sue, Kowalski cannot simply stand by and watch; this time he intentionally becomes involved.

“Gran Torino” is much funnier than I had expected, and at times it is downright sad, but overall, it is one of the best movies of 2008, and I am hoping Eastwood finally takes home a Best Actor Oscar at the Academy Award on February 22.

Saturday... drinks on the patio at @tpccolorado fo