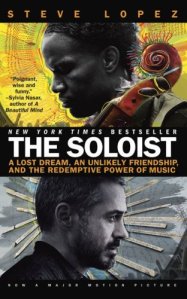 I’ve been watching preview for this movie for what seems like a year. The original release date was December 2008, but for some reason it was pushed to April 24, 2009. The movie is the true story of L.A. Times columnist Steve Lopez (Robert Downey Jr.), who discovers a homeless man playing a violin on the streets of Los Angeles. The homeless man, Nathanial Anthony Ayers (Jamie Foxx), isn’t an average street performer… read the rest of this review.

This was a great way to spend a Monday morning.