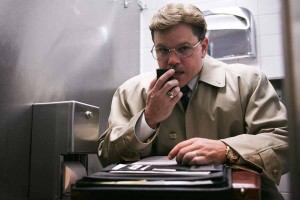 Word of Warning: a bit of a snore fest.

The critics love this one, and I’m not quite sure why. Honestly, I was bored. Not quite to tears, but close. George Clooney is a producer on this movie, and it seems like everything he has a hand in, is starting to look and sound the same. Fast paced dialogue mixed with quirky music and even more peculiar characters. Usually this recipe turns out a decent film, but for some reason it just doesn’t work in “The Informant!”

Based loosely on true events, the movie tells the story of Mark Whitacre, President of the BioProducts Division of ADM (Archer Daniel Midlands) during the early 1990s. Whitacre, at the prompting of his wife, decides to help the FBI in an investigation into price fixing. Whitacre has first-hand experience of widespread price-fixing in the agriculture business, and helps the FBI spy on industry negotiations and conversations for nearly three years.

There are a couple humorous moments, and Matt Damon’s portrayal of the brilliant, yet odd Mark Whitacre is well acted. However, something is off with this movie. I didn’t know the story of Whitacre prior to seeing “The Informant!” and by watching the previews I thought the story took place in the 1960s. The music doesn’t fit with the 1990s setting, and the headings that pop on the screen at various times during the movie also do not fit – it’s all rather distracting.

Director Steve Soderbergh, who also directed the “Oceans” films, seems to be aiming for the same type of vibe in “The Informant!” but I think he misses the mark. Whitacre isn’t a very likable character. He’s a bumbling fool, not a lovable bumbling fool. There was no one to root for in “The Informant!” It’s the simple story of a whistle blower who, as it turns out, isn’t that great of a guy.

Scott Bakula (“Quantum Leap”) and Joel McHale (“The Soup” and “Community”) are both entertaining as FBI agents working with Whitacre. And, as previously mentioned, Matt Damon, who gained 30 lbs for his role, is good as well. But in the end, I just didn’t care, and left the theater asking, “What was the point?”

“The Informant!” is mostly a snooze fest, and though it’s being called a “dark comedy,” it lacks a punch line. The exclamation point in the title of the movie is an assertion of excitement the story is unable to fulfill.

Off to see the Wizard!
Vegas Baby!