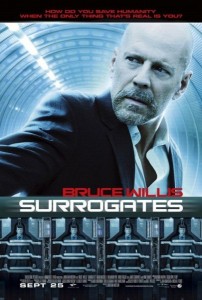 Word of Warning: Don’t over think it, just enjoy.

“Surrogates” is just plain fun. Think, “Total Recall,” a movie I watch anytime I run across it on television. You can’t over think these kinds of movies, just watch and enjoy them for what they are – far out science fiction flicks meant to entertain, not educate.

This movie is based on the 2005-2006, comic book series “Surrogates.” The year is 2017, and things are very different. Most humans across the planet have opted to utilize a surrogate in their every day life. From the comfort of their home they control this surrogate through their mind. The surrogate performs their daily (and nightly tasks), needing only brief charging time throughout a 24-hour period. Confused? Think “Sims,” except not in a virtual world, but in the real world. 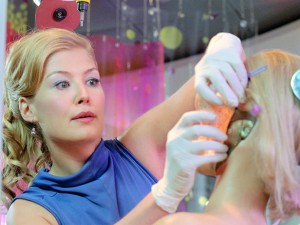 As expected, people have chosen surrogates with stereotypical good looks, so the world is full of beautiful people”¦er, robots being controlled by people.

The rise of surrogates has changed a lot of things. For instance, surrogates have replaced soldiers on the battlefield, controlled by enlisted soldiers from pods safely located away from the war zone. Surrogates are all monitored, so crime has virtually disappeared. Since the real humans are controlling their surrogates from the safety of their homes, and the surrogates cannot be technically “injured” or “killed,” accidental death isn’t a concern. In fact, the company that created surrogates is now introducing their newest line of children surrogates.

There are those humans who have refused to use surrogates. The group, led by a man who calls himself, “The Prophet” (played by Ving Rhames), lives in human-only communes, and the relationship between these “dreads” and the outside world is tense.

FBI Agent Tom Greer (Bruce Willis), who uses a surrogate in every day life, and his partner Jennifer Peters (Radha Mitchell), have been put on a disturbing case. There’s been a murder of a surrogate, and his operator has also died because of the event. This has never happened before. Operators have always been unscathed, even when catastrophic events occur to their surrogates. The mystery deepens when yet another surrogate is killed, and its operator is also found dead.

This is where the real fun starts. Greer must find out who is killing surrogates and operators before the surrogate-using public finds out they are at risk. Greer soon finds he is in the middle of a dangerous conspiracy, and he begins to doubt everything he has come to believe.

There’s never a bad-looking person in the movies these days; even movie extras are beautiful people. Somehow “Surrogates” is able to make the audience believe the surrogates really are plastic. Whether it is make up or lighting, each gorgeous surrogates somehow looks fake, and this works to advance a somewhat plausible storyline in this movie.

Though the movie bats around themes of “big brother” and our modern-day obsession with youth and beauty, it isn’t a message movie. It’s just an enjoyable sci-fi, definitely worth a matinee price. Especially if you’ve enjoyed such films as “Total Recall” or other eighties and early nineties science fiction flicks.