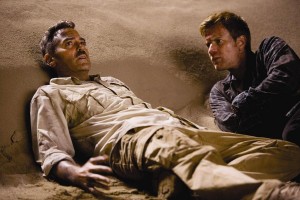 Word of Warning: Funny film, but not as funny as it thinks it is.

Bob Wilton (Ewan McGregor) is a journalist from Ann Arbor, Michigan. His wife has left him for his editor, and he does what men do when women leave, he goes to war. Well, not really. He decides to go to Iraq and cover the war for his newspaper.

In search of a story, he meets Lyn Cassedy (George Clooney), who claims to be a contractor from Michigan on a job in Iraq. Using his reporter intuitions, Wilton isn’t convinced of Cassedy’s story, and he soon learns there is more to this man than he ever could have imagined.

Cassedy tells Wilton he is part of a former military project called “New Earth Army,” a group of psychics trained to read minds and perform other more scandalous and sadistic acts. The movie includes flashbacks of Cassedy’s involvement with the New Earth Army.

At first, Wilton is a skeptic, however, as he spends more time with Cassedy he begins to realize the story of the New Earth Army may be true. After their vehicle breaks down in the desert, the two embark on a crazy adventure involving cloud bursting and mind control.

Honestly, “The Men Who Stare at Goats” is funny, yet ridiculous. Clooney plays the character we’ve become accustomed to seeing him play lately – a quirky, cocky, yet likable individual.

Ewan McGregor is fine as Bob Wilton the melancholy journalist, but I kept catching his Irish accent coming through and it was distracting. Jeff Bridges plays Bill Django, leader of the New Earth Army, but he mostly channels his character from “The Big Labowski.”

I enjoyed most of the movie, but the last scenes crossed the line into total absurdity. Yes, there were a few great lines and laugh out loud funny parts in “The Men Who Stare at Goats,” but it’s not going to be a classic, and I doubt it will gain a cult following.

The bottom line? I think “The Men Who Stare at Goats” is worth a matinee price, but this movie is ultimately forgettable.

Note:   This movie was inspired by the non-fiction  book “The Men Who Stare at Goats” by Jon Ronson.  The book explores actual tactics the  American military  has researched and  employed. These tactics  involve  exploring  human  “super powers,” like walking through walls and  killing goats by starring at them.  Learn more at www.jonronson.com.