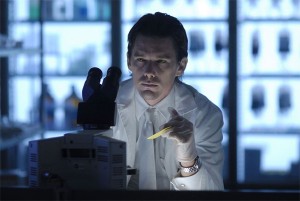 Directed and written by The Spierig Brothers

Word of Warning: Blood and guts all over the place!

In today’s climate vampires sell movies, and “Daybreakers” takes advantage of this trend, and although the premise is intriguing the story is not well executed.

The year is 2019, and a “virus” has plagued the planet for years, turning most of the human population into vampires. This transformation has come with a price. The vampires need human blood in order to survive, however they are quickly running out of human blood, because all the humans are becoming vampires.

Enter, Edward Dalton (Ethan Hawke). I’ve been a fan of Hawke since “Dead Poets Society“ circa 1989. I became an even bigger fan when “Reality Bites“ came out in 1994. Hawke, who usually plays a quite brooding sort, has acting chops, but his depiction of a conflicted vampire in “Daybreakers” left much to be desired. Not really his fault, I blame the writing.

As a side note, it seems vampires with a conscience are named Edward. A friend, and huge Twilight fan, thinks the old-fashion name will soon make a comeback due to the popularity among the onscreen vampire set. The name is currently the 148th most popular boys name.

Edward Dalton, who does not delight in eating human blood, is a hematologist working for a corporation researching a blood substitute. In addition to their research, the corporation, headed by Charles Bromley (Sam Neill), farm humans for their blood. And you think our current day corporations are bad.

The year 2019, is not a pretty place. The vampires work and play at night, so the movie is dark. There’s also a severe blood shortage, causing vampires to attack one another or feed off themselves, triggering a mutation. These hungry vampires turn into a large ugly bats.

The movie was made in Australia, and Weta Workshop, of “Lord of the Rings” fame, created the special effects. The effects are good and, at times, rather campy.

Through a predictable chain of events, the human resistance contacts Edward to help them. One of the humans, a guy named Elvis (Willem Defoe), thinks he’s discovered a cure to the vampire virus, but is a cure really what the world wants?

“Daybreakers” has some cool special effects, and the premise is promising. The writers have created an interesting world, and unlike some other vampire movies out there, they stuck to a more a more traditional vampire mythology. But at the end of the day this movie is completely forgettable, and I think it could have been a lot better.

If you are a huge vampire fan, this movie might be worth a matinee, otherwise, I encourage you to wait until it comes to television. I’m sure it won’t take long.

Love books? Like movies? Listen up!
Books: Top picks of 2009