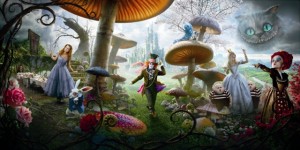 Word of Warning: This one is properly rated. Although it’s dark, partly due to the 3D glasses, I don’t think it would be terribly frightening for the little ones.

The original “Alice’s Adventures in Wonderland” was a book written by Englishman Lewis Carroll in 1865. It is considered the quintessential example of the  “literary nonsense” genre. Burton’s new “Alice” doesn’t quite live up to that description. Although the world he has created is a bit nutty, it’s not quite as nonsensical as Carroll’s Wonderland.

According to my husband, who is more of an “Alice” aficionado than I am, the Mad Hatter (Johnny Depp) wasn’t quite mad enough. My husband is also a big fan of Tim Burton, and he felt “Alice” didn’t feel as though it had enough of Burton’s style in it. That being said, he enjoyed the movie, but I enjoyed it even more.

This is the story of Alice Kingsley, a 19-year-old whose future is being planned out for her without any consideration of her wants or desires. This was a fairly typical situation for young women of the time period. When Hamish Ascot, a sniveling Lord, asks for Alice’s hand in marriage, she is expected to say yes, but instead she flees into the forest where she falls down a rabbit hole.

Alice finds herself in a strange and magical land where she meets odd creatures and animals that are able to speak. Everyone seems to know her, and yet she doesn’t know anyone in this peculiar place. She finds herself wrapped up in an adventure story where she is destined to play a large role. All the while, she continues to believe she is dreaming.

Her adventure in Wonderland starts out  feeling familiar, in a dark wooden room with lots of differently sized doors. There’s even a bottle marked “Drink Me” and a cake with the words “Eat Me” written on it. But that’s where the familiarity starts to fade. This Alice is caught up in a very different story than the younger Alice, a slightly more dangerous tale.

Interestingly, Tim Burton had never filmed on green screen before and ninety percent of “Alice” is filmed on green screen. According to once source, the green screen scenes were filmed in a relatively short period – 40 days – leaving the cast and crew a little nauseated. It’s said Burton actually wore a pair of lavender lenses fitted onto his glasses to cut down on the overload of green.

With a mix of live actors and animation, I enjoyed this whimsical, 3D Alice story. Purest will likely have issues with the movie, but it’s an enjoyable film on it’s own merits. Perhaps the Mad Hatter could be madder and the ending could be a little less contrived, but this one is worth the full price of admission, and be sure to see it in 3D.