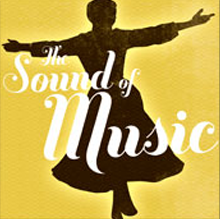 The hills of Northern Colorado are alive with music this spring, because Midtown Art Center has “The Sound of Music” on their main stage. Colorado is lucky to have a collection of fine dinner theaters, and MAC is the only one located in Fort Collins.

As a reminder, your ticket at this establishment includes dinner plus the show, and this all-in-one evening of entertainment is why dinner theater is a HeidiTown.com recommended event.

Midtown Arts Center is a well-appointed and because my husband and I were a little early, and thirsty, we stopped at the lobby bar for a couple drinks and to reminisce about previous productions of this show we have seen over the years.

My childhood was filled with the songs from “The Sound of Music,” and I have seen at least three productions of the play. We saw the show last weekend and the score has been solidly stuck in my head every since, but it’s not a bad thing to find myself singing, “These are a few of my favorite things”¦”

Dinner theater is definitely one of my favorite things and this time, I was happily surprised with my meal at MAC. In the past, dinners at this theater have under whelmed, however, they’ve hit the mark with their new chicken en croute, first introduced during “Avenue Q.”

Both my husband and I ordered it at the recommendation of the hostess. It’s a moist chicken breast stuffed with cream cheese, spinach and roasted red peppers wrapped in a fluffy pastry and topped with parmesan cream. Just writing about it is making my mouth water. Served with mashed potatoes and the vegetable of the day, I give MAC an A+ on this dish.

As a side note, the chicken en croute is not an upgraded meal, so you don’t have to pay extra for it, and I’m hoping this menu item sticks around for a while.

Once the musical got underway I was reminded of why this theater is such a great place to catch a show. The combination of a live band, great acoustics and a well-executed floor plan meant that our seats at the back of the house were just as good as anywhere else in the theater.

As most of you already know, “The Sound of Music” is set in Austria, just prior to WWII. It is the story of a precocious wanna-be nun named Maria, who is asked to leave the abbey and try her hand at the real world activity of being a governess. She goes to work for the gruff Captain Von Trapp, a widower with seven children.

Colleen Johnson is making her debut at MAC in the role of Maria, and her voice is as sweet as she is adorable. It is the children, however, who steal the show, and it has been this way in every production of “The Sound of Music” that I have seen.

The children in the roles of the Von Trapp family do an outstanding job, but six-year-old Camille Nugent, who plays the littlest Von Trapp, Gretl, is the real scene-stealer. According to her bio she’s retiring from this role after this production – she’s apparently appeared as Gretl three times already – so you’d better get to MAC to see her before her retirement.

One of the musical numbers that really stands out is “Sixteen Going on Seventeen.” It’s been one of my favorite songs from this musical since childhood, and Sarah Grover (Liesl) and Drew Hirschbloeck (Rolf) do a splendid rendition of the song with an interesting take on the traditional choreography.

Both Grover and Hirschbloecker have better voices than half the kids on “American Idol,” and I truly hope that I get to see Grover in more productions at MAC. Her star shines brightly on stage. 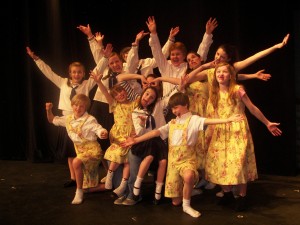 Overall this is a solid production of “The Sound of Music.” The only thing that didn’t impress was the set, however, dinner was delicious and the show was thoroughly entertaining and I would highly recommend it for families.

Midtown Arts Center is currently selling packages for next season, but due to contractual issues they can’t release the names of the shows they have secured. They are asking patrons to “take a leap of faith” and purchase their tickets anyway. The biggest benefit of securing tickets before the shows are announced is that once announced the ticket prices will go up.

MAC is promising that their 2012-2013 season will be the biggest yet and the titles they have secured include two state premieres.

For more information on buying season tickets, or purchasing tickets to “The Sound of Music,” on stage now through June 2, 2012, go to AdinnerTheatre.com or call (970) 225-2555. You can also visit them on Facebook.