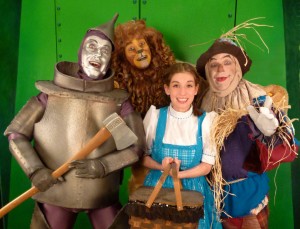 When Ryan and I heard that “The Wizard of Oz” was coming to Boulder’s Dinner Theater this summer, we had to see it. We had never seen the stage show, and we knew BDT would be the place to see it done well.

Our evening started out as expected with delicious bread and crispy salad. The menu has changed a bit since our visit last fall and I opted for a newer item, the Asian Beef Noodle Salad, and Ryan chose BDT’s old standby, Chicken Cordon Bleu.

At dinner theater, the price of your ticket includes the meal and the show, but there are add-ons available such as appetizers, dessert and cocktails, beer and wine. I ordered a nice, tart chardonnay, while Ryan ordered a frozen margarita in celebration of summer. The BDT has an extensive margarita list, including one that comes in a collectible Wizard of Oz glass.

Both of our meals were good, and I would definitely order my Asian salad again. 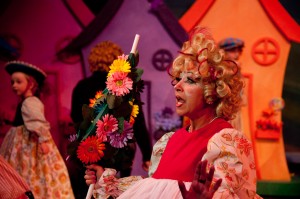 Now, on to the show.

First, I want to commend BDT for always having a good variety of shows in their lineup. Our last visit was to see the for-adults-only “Avenue Q.” After “The Wizard” this summer, “The Full Monty” will take the stage in the fall, followed by “Spamalot,” “Sisters of Swing, the story of the Andrew Sisters” and “Shrek.” Way to keep it interesting, BDT!

I have been to a lot of dinner theater shows over the years – a lot – and I can honestly say that this was in the top 3 most entertaining shows that I have ever seen. It’s everything you want from “The Wizard of Oz” and more. 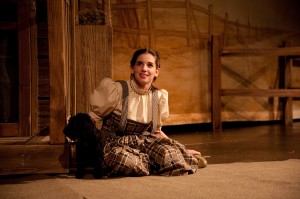 Now some of you are going to think that I loved this show because there was a live dog in it; and you’d be half right. As an avid dog-person, this probably swayed my opinion a tiny bit. The dog that plays Toto (Max) is adorable, as is the woman who scored the role of Dorothy (Sara Grover). Grover plays her role perfectly, but it is the Scarecrow (Scott Beyette), Tin Man (Bob Hoppe) and Lion (Seth Caikowski) who steal the show.

I’m a huge fan of Scott Beyette and Bob Hoppe since they appeared together in the BDT’s production of “Singin’ in the Rain“ in 2010. Beyette’s soft shoe dance as the Scarecrow in “The Wizard” is one of my favorite scenes in “The Wizard.” Of course, Caikowski is simply brilliant as the Cowardly Lion and had the audience howling with laughter throughout the show.

I’m not going to give you a play by play, after all, you know the story, but producing artistic director, Michael J. Durant, has added some clever interpretations that work well. I won’t give them away here, because it’s part of what makes this production extra special.

Quite simply, “The Wizard of Oz” at Boulder’s Dinner Theater shouldn’t be missed. The munchkin scene is reason enough to see the show and Joanie Brosseau’s performance of Nikko as the leader of the Flying Monkeys is also a very good reason. I love Brosseau, who was a standout in “Avenue Q.”

“The Wizard of Oz” is colorful, creative and thoroughly entertaining. This production runs from May 18 to August 31, 2013, and it’s the perfect show for any age. Go to BouldersDinnerTheater.com for show times and tickets.