Who could forget Dolly Parton, Lily Tomlin and Jane Fonda in the 1980 woman empowerment movie, “Nine to Five,” the memorable film about three fed-up coworkers who kidnap their chauvinistic boss and turn around the office in his absence?

We saw the stage play at Candlelight Dinner Playhouse last week, and while they have big shoes, and in one case, a big bra to fill, the three lead actresses in this musical prove they’ve got the comedy chops to take on these iconic roles.

The menu at Candlelight changes a bit with each play, and this time around we had the choice of meatloaf sandwich, chicken casserole, a tilapia dish and several vegetarian options as well as upgrades such as prime rib.

We each enjoyed the hearty chicken casserole, and while I stuck with wine for dinner, Ryan ordered one of the show’s specialty drinks, the Judy’s “New Girl” Attitude Adjustment, a white Russian with an almond joy twist. 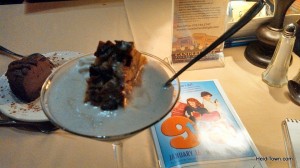 At dinner theater your ticket price includes the show, dinner, coffee and soda, but you can add on appetizers, cocktails, dessert etc. For dessert I opted for the Bread Pud’n Alexander Cocktail, a drink featuring Loveland’s very own Spring 44  Bourbon and a piece of Candlelight’s famous bread pudding served up together in a martini glass. Watch out, this dessert cocktail has a strong alcoholic kick.

The music for the stage play was written by Dolly, and has that familiar Parton funny and witty flair. As this musical gets underway, it will have a familiar feel, as the storyline does not waver far from the original movie plotline.

Judy’s husband has recently run off with his secretary and she’s been forced to go to work at Consolidated Companies. Despite having absolutely no secretarial skills, Violet (Beth Beyer), the office manager takes pity on Judy (Heather McClain) and gives her a job. 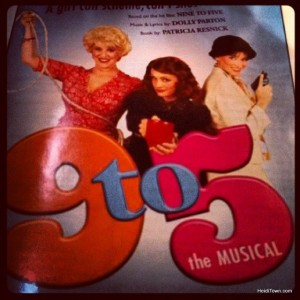 With her hour glass figure and big blond locks, Doralee (Michelle Sergeeff), isn’t well-liked by her coworkers, but eventually, the three ladies bond over their hatred of their boss, Franklin Hart, Jr., played by Brian Burron. Burron, who also staged and directed this show, took over the role of Hart when the actor originally cast for the part broke his foot.

Burron is outstanding and I felt like the scenes with him and the three leading ladies are some of the best. Everyone plays their part and no one outshines or over acts the others on stage. These scenes are well balanced and tremendously funny.

However, my absolute favorite scenes are when the three women fantasize through song about how they would kill Franklin Hart, Jr. These scenes give each actress a chance to display their personal musical and dance talents; which are extraordinary. I never ceased to be amazed at the talent that is displayed on this stage.

With catchy tunes, costuming and hairdos that will take you back a few decades (check out Doralee’s various shoes throughout the performance), “9 to 5″ is a bit of nostalgic fun with an enduring message of woman empowerment.

HeidiTown on the Radio: March 2014 in Colorado, Part One
HeidiTown Gives Back: Pets Forever

Just because we all need the occasional reminder t