Most people are familiar with Andrew Sisters’ impersonators, but the actresses on stage at Boulder’s Dinner Theater become more than simple caricatures of the famous trio. The musical, “Sisters of Swing,” gives the audience a glimpse beyond the makeup and stockings and into the lives of three, real women, who lived, laughed, loved and endured heartbreak, just like the rest of us.

The Sisters of Swing at Boulder’s Dinner Theatre is the regional premiere of this show, and the talented cast took the stage on March 7, so there’s only a few weeks left to catch this one. We saw the show on a Thursday in a nearly full house.

On our last couple visits to BDT, Ryan’s enjoyed the customer favorite, chicken cordon bleu. I, however, opted for the newest menu item, a yellow coconut curry with peppers, potatoes, carrots, onions and basil served over brown rice. I added chicken for protein and I think most curry lovers will be very happy with this item.

The story of the Andrew Sisters begins with three girls, a piano and a dream. The sisters didn’t become famous overnight; they had to work for it. Laverne, born 1911, Maxene, born 1916, and Patty, born 1918, were just children when they won a talent contest in their hometown of Minneapolis.  The musical follows the sisters as they travel the country, singing for their supper, literally.

I was impressed at how effortlessly the personalities of each Andrew Sisters are captured by the actresses, Joannie Brosseau (LaVerne), Tracy Warren (Maxene) and Norrell Moore (Patty). I think anyone with a sibling will relate to the occasional spats that developed between the girls.

While there’s top-notch acting in this production, it’s the music that the audience comes to hear, and the tunes do not disappoint. From “Three Little Fishes” to “Boogie Woogie Bugle Boy,” I found myself dancing in my seat during the the musical numbers. The energy of the actresses, especially Norrell Moore, is contagious. On our visit to BDT, the three ladies were flawless, quite a feat in this show. 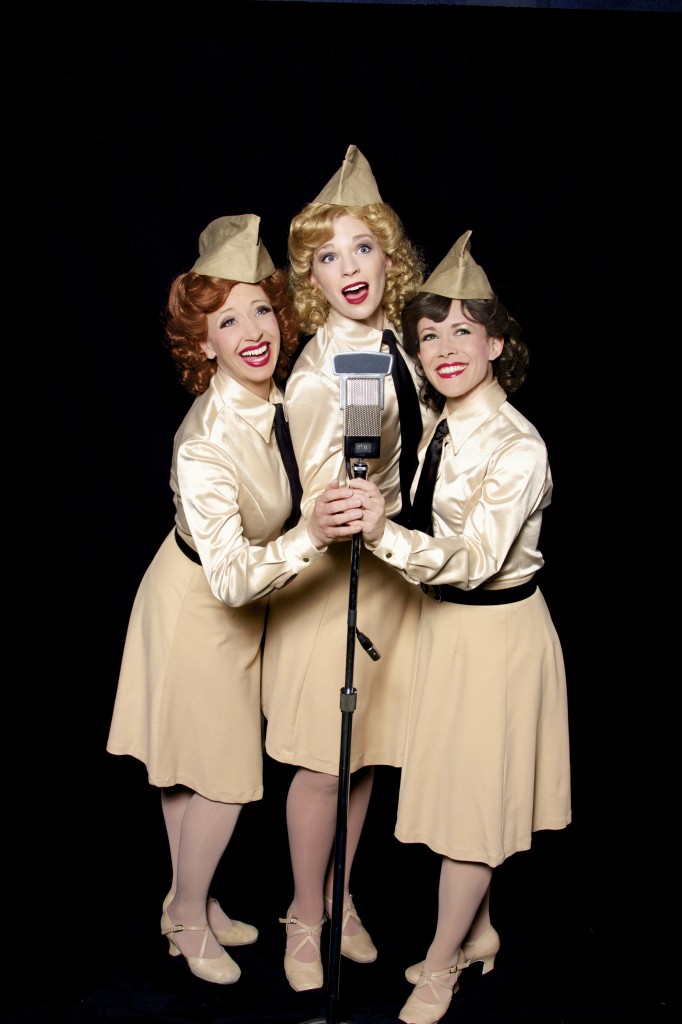 This musical takes the actresses through their paces, from fast-paced dance numbers to somber scenes of sorrow and anger. Like most of us, the Andrew Sisters had their fair share of ups and downs. We watch as they embark on their USO tour during World Word II, where they sang and danced so much they barely had time for sleep.

We follow them through failed relationships and even personal quarrels; some that lasted years. The Andrew Sisters sold more than 75 million records (although the last official count was done in the mid-1970s), and are one of the best-selling female vocal groups of all time. Interestingly, songs such as “Bei Mir Bist Due Schon” don’t sound old fashion, and that’s probably because the Andrews Sisters’ tracks have been covered by hundreds of artists through the years.

It’s wonderful to see a production that has three female actresses as the anchors, especially three gals as talented as Brosseau, Warren and Moore, although I’d be remiss if I didn’t give some accolades to Scott Severtson. He was cast as the “Utility Guy,” which means he plays a number of different characters, but every time he appears hilarity ensues. Severtson is the best “utility guy” I’ve seen in a production in a long time.

The “Sisters of Swing” runs through May 11, so get your tickets soon. You do not want to miss this one. Go to bouldersdinnertheatre.com to purchase tickets today.

HeidiTown on the Radio: May 2014, Part One
HeidiTown Gives Back: Realities for Children (Realities Ride & Rally)

Just because we all need the occasional reminder t