When writing about breweries, writers often concentrate on the beers, and while that’s an important topic, sometimes the broader experience is worth writing about. In my travels around Colorado, I get the opportunity to visit a lot of breweries, and there are certain moments that stand out, so I thought I’d share a few of them with you. 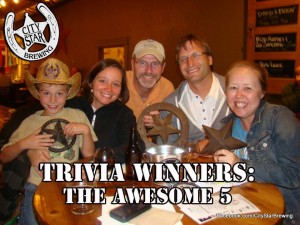 I freelance for the Berthoud newspaper, so I have had the great pleasure of writing about City Star since they opened in 2012. The brewery is one of my preferred watering holes. I love their inviting taproom and their gold medal Bandit Brown is a favorite.

While every visit is a good experience, my favorite City Star Brewing memory is winning trivia night, not once, but twice. Fun isn’t a strong enough word to describe trivia night at City Star – it’s a hoot, and my face always hurts the next day from overusing my laugh muscles.

Trivia night at City star is Wednesdays if you want to come take me on.

Like City Star, I’ve known the guys at Grimm since before they opened their doors back in 2010, and have had the great pleasure of writing about them a lot over the years.

I have spent many a memorable hour in their taproom, but the happiest memories are playing games there with friends. A night of Liars Dice resulted in more laughter than I thought was humanly possible.

They have a great game collection, good stuff like Catan and Small World. They even have a Sunday Taproom Special of $1 off pints if you are playing a game.

Beers in the grass at Dolores River Brewery, Dolores, Colorado

Here’s a memory from a long time ago. It was around the time I’d started to ramp up HeidiTown, but hadn’t yet grown the brand to what it is today.

For our 7th wedding anniversary, we spent three nights in Dolores, Colorado, a good place to stay while visiting Mesa Verde National Park and the surrounding area. Our inn was across from Dolores River Brewery, and we ended up there every night after our adventures.

The standout memory here was enjoying beers in the brewery’s outdoor lawn area. I can almost smell the springtime grass and hear the buzz of busy bees.

On a whim, we decided to stop at Dry Dock while we were in the area earlier this year, and we were so glad that we did. You can’t go wrong with a flight of beer here; everything is tasty.

Hungry, we looked over the list of nearby restaurants that deliver to the brewery and decided to order from Wing Hut. Again, this was a very good decision.

This random afternoon of top-notch beer and messy, but seriously amazing wings will go down in our memories as one of the loveliest, impromptu afternoons ever.

One of my favorite brewery memories occurred back in 2013 on our way back to Pagosa Springs from the Native American Gathering at Chimney Rock.

It had been a hot and dusty day at Chimney Rock and we were ready for a beer and grub so we stopped in at Pagosa Brewing & Grill. While we were touring the brewery and tasting delicious beers an afternoon storm blew in.

The rain was coming down in sheets, so we settled in under the big outdoor tent and tucked into a lunch of locally made brats and wood fire pizza. It was a marvelous way to spend a rainy summer afternoon.

Speaking of rain, after a full day of touring the Paonia area and visiting The Living Farm, we walked down from where we were staying at The Living Farm CafÃ© & Inn to try out Revolution Brewing.

A brief rain had soaked the town and all the tables and chairs on the brewery patio were wet and sparkled in the sunshine that had reappeared in full force.

The place was packed with locals. Hippies, ranchers, old-timers, young people with their kiddos running around; Revolution is definitely a community brewery.

We shared our table on the patio with several locals, including Molly. She works at Small Potatoes Farm as a baker and farmer. Molly was delightful and meeting her was a highlight of my trip because she is representative of many of the friendly and down-to-earth folks who have made Paonia their home.

Do YOU have a favorite Colorado brewery experience? Tell us about it in the comment section!