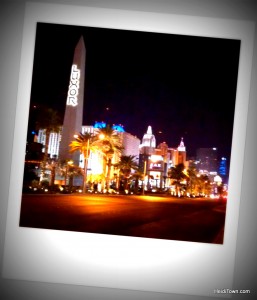 I rarely write about travel outside of Colorado, but even the Mayor leaves the state occasionally, but when I go on vacation, I will likely write about it.

My husband decided that he wanted to spend his birthday in the sports book in Las Vegas, so after a five-year Vegas hiatus, we booked a trip.

Here are some of my Vegas tips, tricks and observations. Please feel free to leave yours in the comment section. Since I wasn’t on an official HeidiTown trip, I didn’t take my real camera, so please enjoy my below average phone photo editing skills.

Objects on the strip are farther than they appear

Some of you probably know about “false peaks,” a phenomenon that I have experienced several times while climbing Colorado’s mountains. It’s the peak you think is the summit, but it’s actually concealing the summit behind it. This is similar to the hotels along the Las Vegas strip. At first these ginormous buildings seem fairly close, but as you walk towards them it’s as if they somehow move farther and farther away. On our first night I  think I may have walked five miles (in flip flops), resulting painful blisters that I’m still sporting.

How to solve this problem? Jump on the Deuce, a city bus that will take you up and down the strip. A two-hour pass is $6 per person, 24 hours is $8 and a 3-day pass is $20. You can ride the Deuce all the way to downtown, aka Freemont Street. Tickets are available at vending machines in front of the various hotels. Also, taking a taxi around the strip isn’t very expensive. If you have a group, a taxi may be the best bet.

Your feet will thank you.

I visited Vegas for the first time in 2000, and scoring a free drink was easy. You simply sat at a machine and a waitress was there within minutes asking for your order. Today, things are much different. We sat at several machines for 20 to 30 minutes without seeing a cocktail waitress. Unless you sit at the blackjack table, you’ll be lucky to have a waitress come by once an hour. 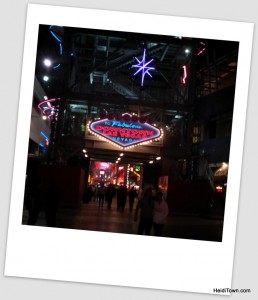 How to solve this problem? Sit at the bar and play video poker. Depending on the casino, you may or may not get good service this way, but at least you’ll get service. It is most cost effective to walk away from the machines and  look for drink specials, which were more prevalent in casinos on the south end of the strip at places like the Luxor and MGM. For instance, the Luxor had football specials such as a bucket of five beers for $20. That’s a savings of $15 on five beers. They also had $5 all day special on a couple different cocktails. The MGM offered five beers for $25 during football. The farther north we ventured, the less drink specials were available. 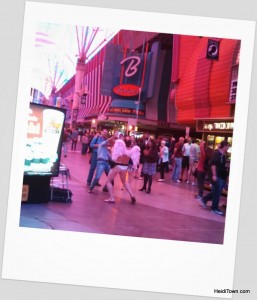 While shows in Vegas will cost you an arm and a leg and a kidney, you can find free entertainment along Fremont Street, especially at night. We had never been to Fremont and were determine to get there on this trip. On a Sunday evening there were no less than 4 bands playing on stages spread throughout the old strip, but it’s not just bands and buskers offering free entertainment. People-watching along Fremont is some of the best I’ve seen, and I’ve spent time on Bourbon Street in New Orleans.

We watched a woman strip down to her g-string while dancing with a busker and another shirtless gal with little strips of tape covering her nipples. The level of drunkenness goes up significantly along Fremont (maybe they aren’t as stingy with free drinks at casinos here).

We watched a drunken man jay walk through an intersection, nearly running into a police car, and another couple of friends weave their way down the street trying their drunkenly best to avoid running headlong into the occasional ornamental tree. Amazingly, neither spilled a drop of their beers as they stumbled along.

Obviously Fremont isn’t the best place to take the kiddos, especially at night, but it’s a hell of a good place to sit and watch the various “shows” unfold.

And speaking of shows, the  Viva Vision Light Show above Fremont Street is spectacular. We saw several of these six minute shows that bring much of the action on the street below to an abrupt stop as everyone looks up. If you look up, you’ll also see the new Slotzilla Zip Line. There’s an upper and lower zip line and the cost is $40 or $20 per person. Fliers travel up to 40 miles per hours, but we did notice a number of them got stuck and would have to be pulled to the end of the ride, so, as a bit of a Colorado zip line expert, I think they may need to rethink the angle of the lines.

If you are a drinker, and most everyone is a drinker when they come to Vegas, stock up on booze outside the casino; there’s a CVS, Walgreens and some “mom & pop” style convenience stores along the strip. While cocktails start around $10 inside the casino, tiny airplane bottle of booze will only set you back about $3 at the local store. I even snagged a Sierra Nevada Pale Ale for $2.

Eat at Ellis Island Casino and Brewery. Located just a block behind Bally’s, Ellis Island is the home of the $8.99 steak and beer. You’ll have to sign up for a player’s card (that’s new since we last visited this place in 2009), but you’ll get a 10 oz steak and free beer for your trouble. Totally worth it since you’ll pay $40+ for a steak on the strip and $7 to $8 a beer.

Let’s face it, Vegas ain’t what it used to be, but what it is ain’t too bad. It’s loud and obnoxious and over the top in every way. You leave poorer than when you arrived and often with a hangover, but in the end it’s surreal and really is like no other place on earth. While I only need to go once or twice a decade, it’s always fun and always good to come home to Colorado. 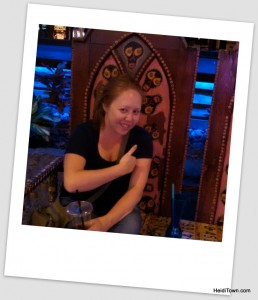