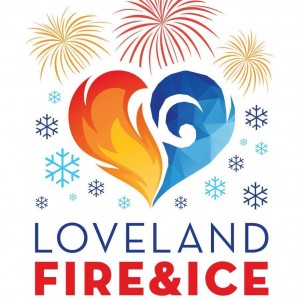 The “Sweetheart City” is whooping it up this Valentine’s Day weekend with a brand new festival.

Loveland Fire & Ice Festival is an extravaganza of lights, fire, ice and snow that will surely warm up your February.

For a handful of years, Loveland has hosted a sanctioned snow sculpting event; the winning team goes on to represent Colorado at the US National Snow Sculpting Competition. That sculpture competition is now part of Loveland Fire & Ice.

This year, in addition to the 10 snow sculpting teams from around the state, downtown Loveland will be alive with the sound of music, fireworks and laughter.

UPDATE: Due to unseasonably warm weather along Colorado’s Front Range, the snow sculpture part of this event has been cancelled and replaced with an ice sculpting contest. As of today (Feb. 10, 2015) six of the snow sculpting teams have signed on to carve ice instead of snow.

Music is a big part of the two-day event that kicks off at 3 p.m. on Friday, February 13 and runs late into the evening on Saturday. There will be three stages in downtown, with the Grimm Brothers Brewhouse Main Stage on 4th and Railroad. Musicians include everyone from a techno DJ to singer songwriters to a soul/funk band. There will even be a fire performer who will wow audiences with her fire art talents. The musicians will play throughout the festival, keeping downtown’s ambiance fun and energetic.

Loveland-based business Blazen Illuminations is going to light up downtown’s buildings like Disneyland. The company is responsible for many amazing light displays around Colorado (and beyond), including the Denver City building’s holiday lights.

Blazen’s pyrotechnic team has some other exciting plans up their sleeve, including working with the bands to provide pyrotechnic effects during some of the musical performances.

A fantastic fireworks and light show is scheduled to take place on both nights of the festival. This huge display will be set to music, so bring along the kiddos and get ready to be dazzled.

Be sure to pick up a Loveland Fire & Ice wristband available the clearly marked table inside the festival area. Wear your wristband to get specials at various retail outlets and restaurants on the weekend of the event.

I’ll see you there!

Birding Festivals in Colorado
My Big Date, a Valentine’s experience in Loveland, Colorado

Where the deer and the antelope play. Travel drea


Error: API requests are being delayed for this account. New posts will not be retrieved.