Author Note: I wanted to entitled this post, “Learning about trees & squirrels in Breckenridge,” but that’s a terrible SEO title and I try to pay a little attention to SEO, so I went with a much more basic (and boring) title.

On our recent trip to Breckenridge during the International Snow Sculpting Championships, we decided to dust off our snowshoes for an afternoon outing at the Breckenridge Nordic Center. 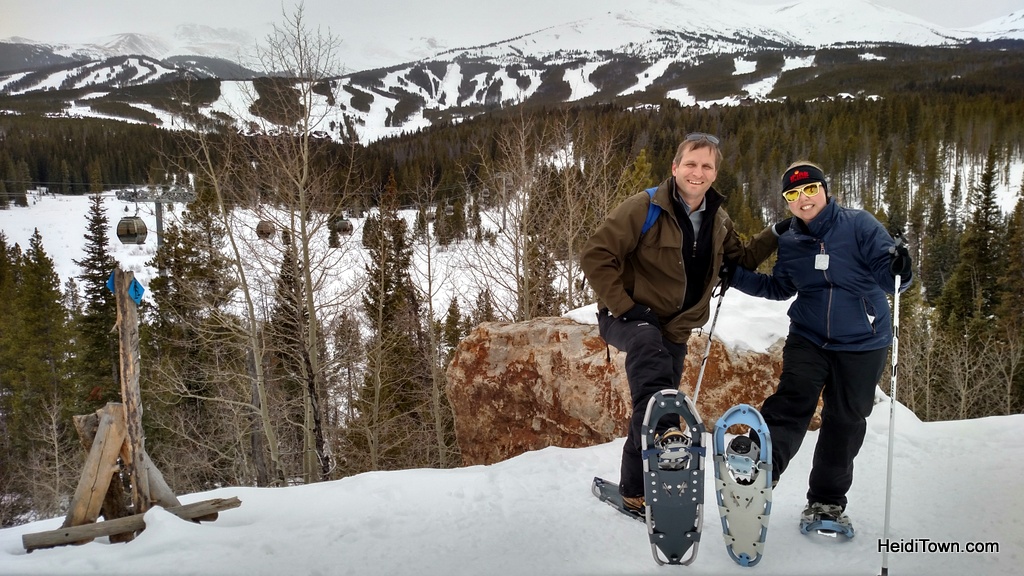 The Nordic Center is a beautiful, nearly brand new facility. Last year, I cross country skied there and it was an awesome, snowy outing. The trails are groomed meticulously even when the snow is coming down in bucket loads.

JD was a nice and knowledgeable guide who knew more about trees than my woodworker husband. We wound our way through trees and awkwardly made our way over the cross country ski trails being careful not to step on any ski tracks. Our destination was Josie’s Cabin, an authentic miner’s home where Josie, her husband and four boys lived in the late 1800s.

There are three historic cabins on the Breckenridge Nordic Center Trail system that serve as warming huts for the skiers and snowshoe trekkers. They do not have electricity or running water, but are an excellent spot to stop for lunch or for a brief rest. There’s even wood that you can use to start a fire in the stove if you need a little warmth.

In addition to tree knowledge, JD also knows a lot about animal tracks. We saw snowshoe hare tracks, but no snowshoe hares. No one ever sees this elusive creature, in part because this big “rabbit” turns white during the winter and blends into its environment and also because they are mostly nocturnal.

According to NationalGeographic.com, “They are separate species – and hares are bigger, have longer ears, and are less social than bunnies.”

We saw a very posh squirrel nest; we assume he was a neat and tidy kind of guy. Usually theses nests are just a mess of twigs and branches. I had seen these nests before, but had no idea that they were squirrel homes.

JD also pointed out signs of porcupines, beavers and moose. All three species leave their marks on the trees and shrubs around the Nordic center.

After our excursion we had a lunch of hot turkey chili in the cozy Breckenridge Nordic Center. Ryan also ordered a brat, which he said was exceptionally delicious.

This guided snow shoe trek is not strenuous and would be perfect for families with kids. Visit the Nordic center online at BreckenridgeNordicCenter.com.

Thank you to GoBreck for hosting us on this trip.