I’ve often said that what makes Golden, Colorado special is that it feels like a remote mountain town and yet it’s just a 23-minute drive from Denver. It provides the best of both worlds and would be an ideal place to live, but if you can’t live there, spending a summer weekend in Golden is the second best option.

This past weekend, we made a quick trip to Golden for a one-night stay at The Dove Inn. Built in 1866, this updated, boutique hotel is located in downtown and is the ideal spot for a vacation in Golden, Colorado.

We stayed in the Castle Rock Suite which would be perfect for an extended stay in Golden because it’s equipped with a beautiful full-sized kitchen. Decorating in blues and grays, the contemporary yet comfy decor of this suite reminded me of rooms I’ve seen highlighted in interior design magazines. No small detail has been overlooked.

The large refrigerator was a bonus because we’d made quite the haul at the Golden Farmers’ Market when we first arrived in town on Saturday. I’d highly recommend planning your Golden summer getaway around this fantastic market. We put together a basket of Palisade veggies and fruit and locally-made bread for Ryan’s mother’s birthday and bought ourselves a collection of sauces, bread and veggies. I bought a jar of Denver-made PiCOsa Green Sauce that is so good I’m literally putting it on everything I eat right this week.

Lunch was a delightful meal at Cheese Ranch Artisan Deli which is just a 5-minute walk from The Dove Inn. We met the owners of this deli at an art festival in Golden last summer and were determined to eat at their deli the next time we were in town. It’s location slightly off downtown’s main drag means no lunch lines despite the amazing food and light, bright ambiance.

Our deli sandwiches, a “Strami” for me and “Dago” for Ryan were scrumptious. They also sell a variety of cheeses and meats, as well as foodie items like pickles. It’s definitely worth a stop the next time you’re visiting Golden.

Clear Creek runs through Golden and tubers and kayakers are always on the water during the summer months. After lunch, we walked the Clear Creek Trail, which is two miles of wide, paved trail that follow the banks of the river. We passed dozens of tubers, kayakers and happened upon a bride and groom getting wedding photos taken at the river’s edge. Even on a hot day, a cool breeze wafts off the swirling waters of Clear Creek making this a refreshing summer jaunt. 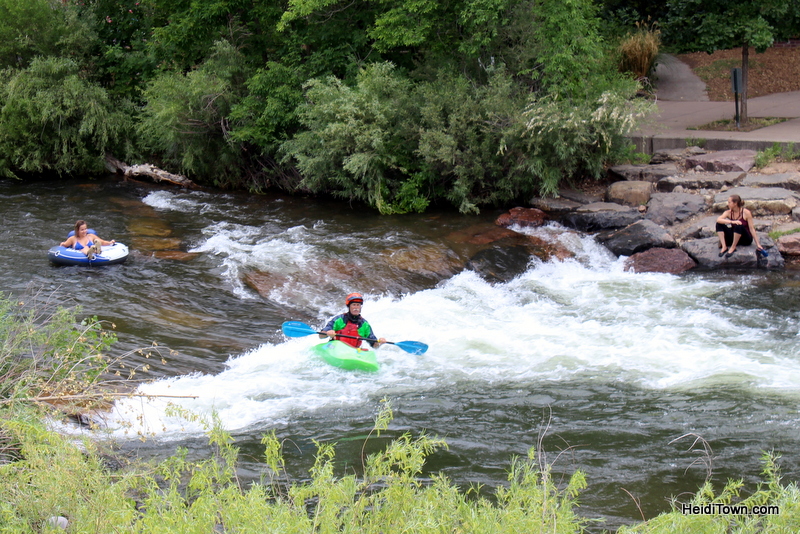 In the early evening, we took advantage of a free carriage ride downtown. All summer long, during Golden Weekends, these carriage rides will be available from 5 to 8 p.m. I used to think carriage rides were “too touristy” until I went on a ride in Durango and was hooked. It’s an entertaining addition to a Golden vacation and an interesting way to view any town. 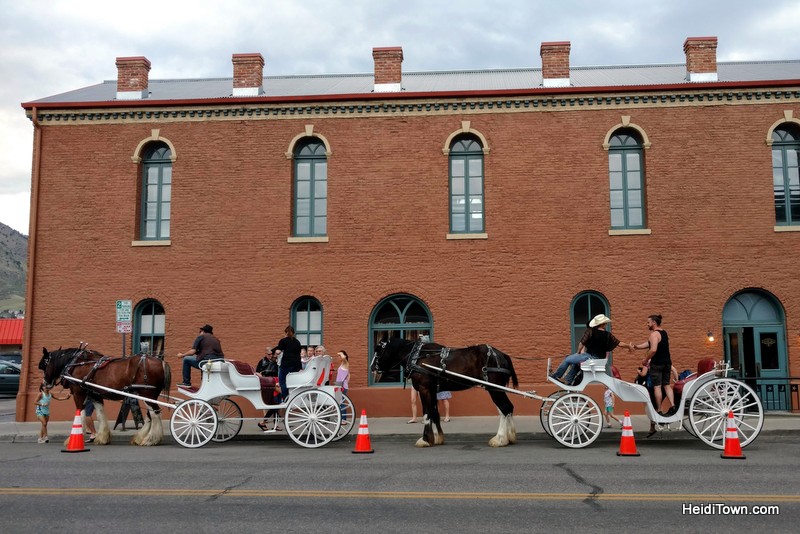 We had dinner reservations at Miner’s Saloon, a relatively new dining and drinking establishment tucked into an alley next door to Golden’s only speakeasy. Miner’s Saloon is a creative cocktail bar that also features a nice selection of wine and beer and casual, yet delicious food.

Before coming, I’d been advised to try the spicy candied bacon appetizer, so we ordered it right away. It’s thick strips of bacon sprinkled with Aleppo pepper and drizzled with bourbon barrel aged maple syrup. Order it and thank me later. 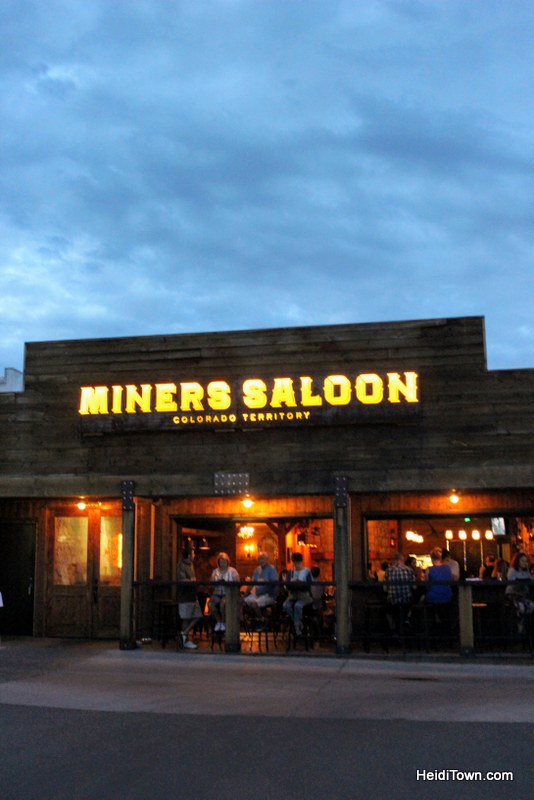 I really wanted the potted egg dish but because of its popularity, by 7 p.m. they were out, so now I have to go back.

Our server, Jodi, was a wealth of info about the menu, both drinks and eats. Ryan’s ordered the “I’m Matt Damon,” a serious Mezcal cocktail that he’ll be talking about for ages, and paired it with a Chicago Dog and game chili. If it’s on the menu I’ve never seen him pass up a Chicago Dog.

RELATED: 5 Unique Colorado Inns that Should be on Your Radar

I had the Bahn Mi served with ginger basil Thai chili sausage, sriracha aioli, carrot, pickled jalapeno, cucumber and cilantro. Hungry yet? Jodi recommended pairing it with the coleslaw side and which is a stellar combo. 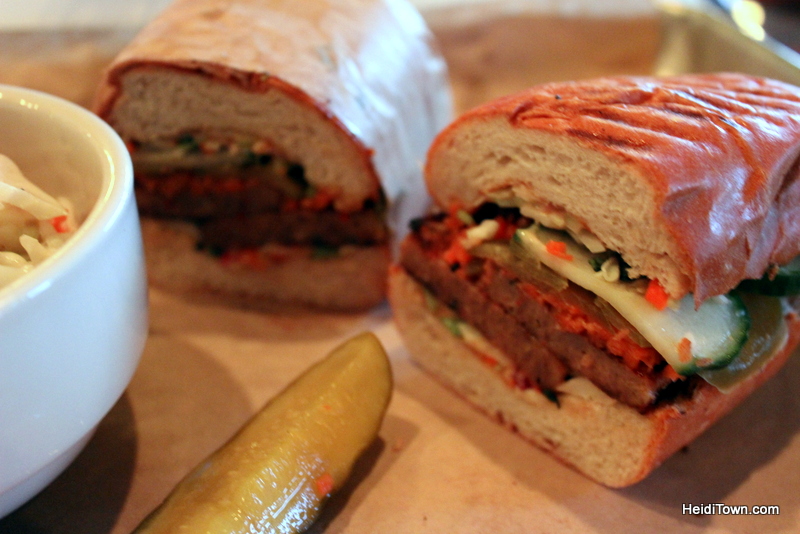 Miner’s Saloon has an option on their menu that suggests letting the bartender make you a creative drink with your favorite spirit. For his second drink, Ryan decided to try this and was rewarded with a terrific mezcal, Blanco tequila, vermouth cocktail that sounds weird but was brilliant. Thank you to Brad the bartender. 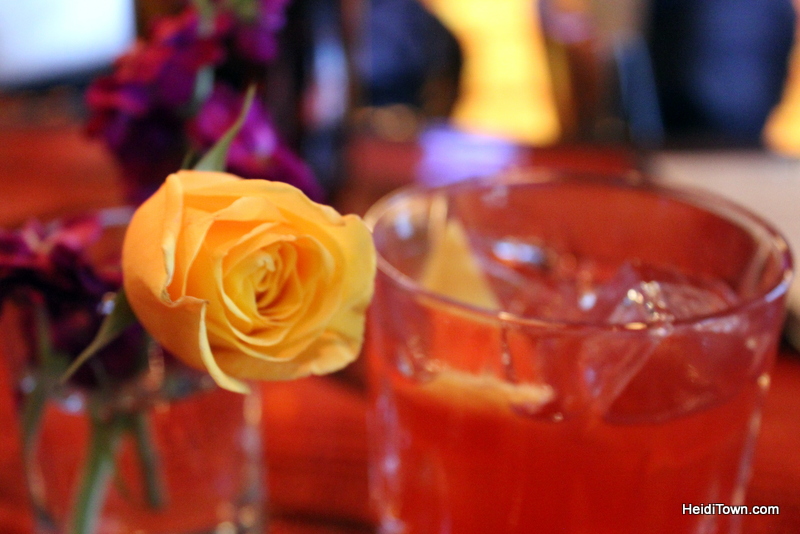 Early the next morning we were off to Denver to watch a World Cup match, but first, a bite of breakfast in the inn’s main floor kitchen. This lodging establishment takes a hands-off approach. There’s no front desk or staff around and each guest is provided with a code to enter the inn and a code to enter their room. It’s a little bit like having rented a vacation home but with more amenities included. 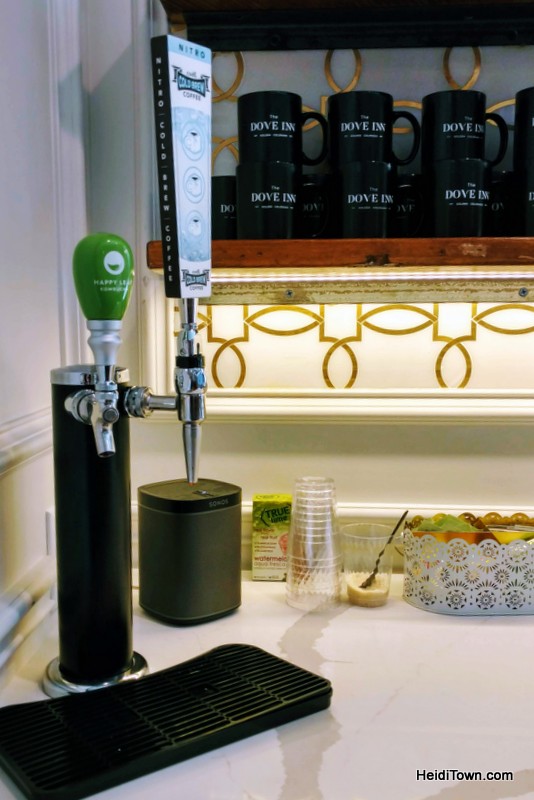 Guests help themselves to an array of breakfast items such as juices, bread, granola, fruit and Noosa Yogurt. There’s also hot coffee and cold pressed coffee and kombucha on tap for a pick-me-up at any time of day.

For help planning your trip to Golden, Colorado, go to VisitGolden.com.

Thank you to The Dove Inn for hosting us and thank you to Miner’s Saloon for the excellent meal and service.

A Beer Tour in Colorado Springs with the Crafts & Drafts Passport

Where the deer and the antelope play. Travel drea