After visiting Unbound: Sculptures in a Field at the Arvada Center, I met Ryan at Odyssey Beerwerks, which is just three miles down the road. This is the only brewery we visited on our getaway to Arvada although there are several more in the town.

Beer Me in Arvada

We ordered a taster tray and the beer is solid. We especially liked the Drifter IPA, but the music was the real winner. While we were there they played Beastie Boys, CAKE and Talking Heads. They also host a Vinyl Night every Thursday and for people with such good tastes in music, I bet it’s great.

On a previous trip, on the recommendation of several brewers we know, we visited Kline’s Beer Hall in downtown Arvada. Featuring long picnic-style tables, Kline’s actually feels like a beer hall. They boast 56 craft beer taps and you’ll find a lot of interesting stuff here. The taps are rotating so you could go here for a year and never drink the same beer twice.

Just a few doors down from Kline’s is Silver Vines Winery. Since 2011, Silver Vines has been making wine from grapes sourced in Washington, California and Colorado. While they do get their grapes from outside of Arvada, they make their wine in town. It’s a warm and inviting space that is a community gathering spot. It was a Girl Scout cookie hot spot when we were there.

On our most recent visit, we enjoyed happy hour at the School House Kitchen & Libations. I am a huge fan of this place which I first discovered while killing time during Ryan’s racquetball tournament in town earlier this year.

It is located in an old school circa 1882, and the theme is played up everywhere from the menus in pee-chee folders to the chairs which look like something from your 5th grade homeroom (but adult-size). Even the beer list is on scantron test paper.

Their claim to fame is whiskey, and I’ve never seen a selection of Colorado whiskey quite as large as they have at School House Kitchen. You can order utilizing a book of whiskey that resembles one of those wine Bibles they have at fancy pants restaurants.

A little early for whiskey, we got a couple of beers and happy hour queso that comes with a “brown paper lunch bag” full of chips. They take the schoolhouse theme very seriously.

We ate dinner across the street at The Arvada Tavern, a bar and restaurant with a legendary past. In April of 1933, just after prohibition was lifted, the Town of Arvada issued the first-ever tavern license to Adrian Kline, owner of Arvada Tavern. Today, the tavern has kept the tradition of prohibition alive through creating high-end cocktails in a space steeped in dimly lit, historic ambiance.

This place will set you back a bit, as it’s not a cheap place to dine, but your cocktail will be perfection in a glass and the low light makes this a highly romantic spot for a date night in Arvada.

We stopped into The Bluegrass Lounge for a bourbon nightcap. The Bluegrass must have been recommended to us by almost a dozen people, and when we’d stopped in earlier there wasn’t a seat in the tiny place available. Later in the evening, it was much quieter. A guy strummed a guitar and sang singer-songwriter ballads in the corner while a few people sat drinking at the bar.

The lounge, which is open for breakfast at 7 a.m. and offers breakfast, is known for its delicious pizza and bourbon selection. At five foot and three inches tall, I was rather intrigued by their high bar. I literally had to crawl onto the barstool and I was tremendously careful when getting off. Ask the bartender the story of why the bar is so high. Spoiler alert: it’s not because it was built for Man O’War, the legendarily tall racehorse. This local rumor is wrong.

Arvada is not short on coffee shops and it seems there is one on every block. In fact, a person could write an entire blog post about coffee shops in Arvada, and maybe I will one day. Instead of coffee, or getting a pastry to-go at the 55-year-old Rheinlander Bakery, we decided on a good old fashion sit down breakfast in Arvada.

RELATED: Dining in Durango (Pho to Posole, it Never Gets Boring)

We ate at Steuben’s, which is a six-minute walk from The Arvada Dragonfly where we were staying. Of course, we drove which took about two minutes. Ryan ordered the cast iron skillet French toast with fresh fruit and I had Joe’s Breakfast with gyro meat. 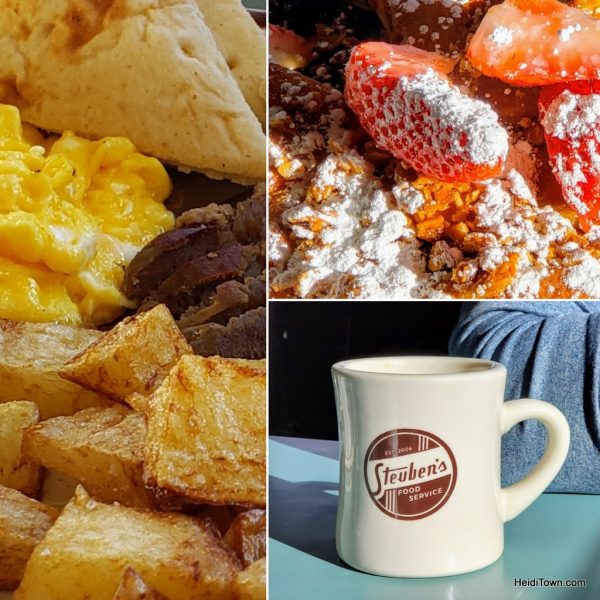 Steuben’s has been around since 2006, although it feels like it’s from 1956. It is the kind of breakfast spot we love and I’m curious to go back to try the patty melt for dinner. It seems like the kind of place that would have an excellent patty melt.

Extra! Extra! Learn all about this weekend’s Book & Arts Festival at the Arvada Center and don’t miss State of the Art, a juried exhibition of Colorado art, also at Arvada Center through March 31, 2019.

This is part two of a two-part post. Read part one here.

This trip was hosted by Arvada Visitors Center.

The Majestic – An Authentic Experience at a Boutique Leadville Hotel