Wherever we travel, food is always a big part of the experience. Even when we’re in a non-foodie town, we make a point to find great spots to eat and we find them everywhere.

Craig is located in Northwest Colorado. It is east of Dinosaur National Monument and 50 minutes west of Steamboat Springs. In this small town, cows outnumber humans and that’s the way most people like it. This isn’t a place with crazy nightlife, instead, it’s an area that oozes Americana.

On our first evening in Craig, nearly straight across Hwy 40 from our hotel, Candlewood Suites, is Vallarta’s of Craig. We headed to this large, orange stucco Mexican food restaurant for dinner. The parking lot was packed; always a good sign that the food will be yummy.

We were sat at a table in a colorful room and ordered margaritas as we perused the menu. They have a big menu and if you love Mexcian food as much as I do, it’s not easy to make a decision. I settled on the Vallarta Plate and Ryan ordered the Renello Plate.

I cannot emphasize how much food arrived at our table and I fully expected it to creak beneath the weight. My plate was huge and my meal consisted of a chicken breast, a steak, a relleno, three tortillas, rice, beans, guacamole and sour cream. It would easily feed two people.

Thankfully our hotel room had a refrigerator because I had leftovers for days. Ryan loved his rellenos and we would absolutely go back to Vallarta’s in Craig. While it’s not cheap eats, it’s not expensive either and you will go away full.

We stopped by Maybell several times and ate three meals in the park during the two-day Heritage Days that runs in conjunction with the Great American Horse Drive. Be aware that there are no restaurants in Maybell. 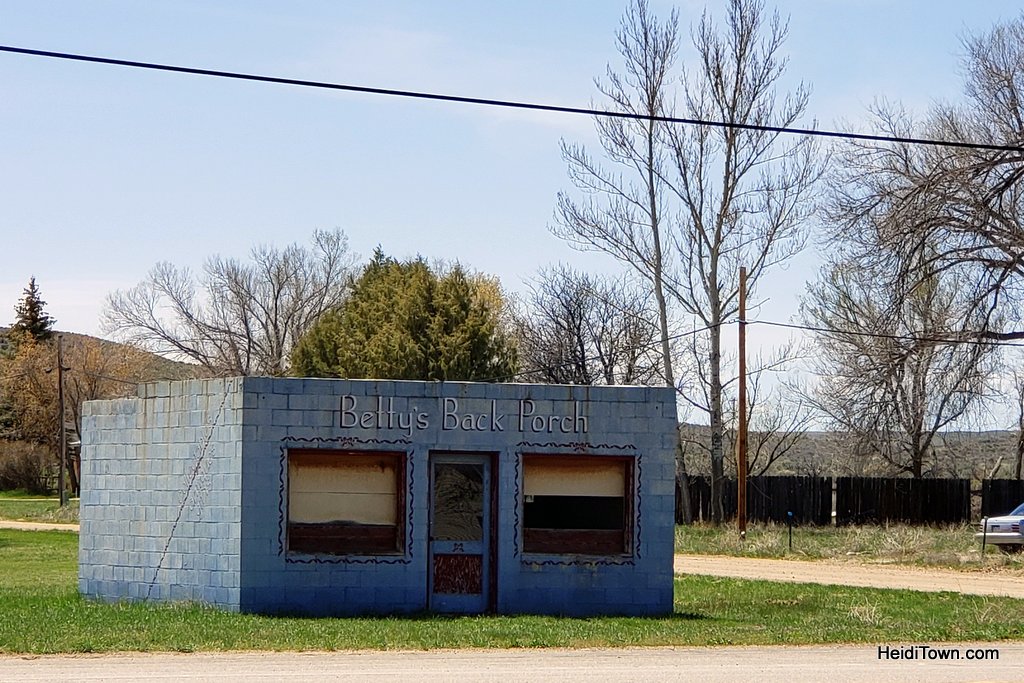 We ate excellent breakfast burritos from the fire station tent, cheap, satisfying hamburgers from a vendor in the park and tacos and barbecue from food trucks. I would highly recommend this event as it is an authentic slice of Americana in Northwest Colorado.

Back in Craig, on the second evening, we enjoyed drinks and an appetizer on the patio at Gino’s Pizzeria & Italian, a charming little bistro downtown, and from what I can tell, the best patio in Craig. They were hosting a musician, which they frequently do on the weekend, and his cover of “What’s Up” by 4 Non-Blondes was the best.

Afterward, we browsed a few of the downtown shops although it was nearly closing time at this point. Most of our time was spent at Kitchen a la More, a store with everything from pots and pans to locally-made handmade soaps and lotions. We left with a supply of green chile olive oil, jalapeno balsamic vinegar, loose leaf tea and more.

We dined at Carelli’s Pizza for dinner. Also located downtown, Ryan claims to have had “the best Reuben ever” at this restaurant several years ago. They have more than pizza including a variety of pasta options for dinner.

An obvious favorite of the locals, there was no place to sit except for a table near the front door. This became an asset because I am an avid people-watcher and I quickly realized that everyone knows each other in Craig. With a population of around 9,000, it would be hard to remain anonymous in this town.

RELATED: A Stop at the Wyman Museum in Craig, Colorado

I think there was a Derby Party on the back patio because everyone, including our waitress, was wearing a big hat. This was rather amusing as Carelli’s theme of golf and snowboarding doesn’t really go with big hats. Notably, we got great service despite the restaurant being super busy.

We ordered the All the Way pizza and got two side salads. It was way too much food for two people who had just had an appetizer at Gino’s. The pizza was solid and Ryan enjoyed the line-up of Colorado craft beers on the menu. This restaurant is a must-stop when in Craig.

On our last day in Craig, after a long day in Maybell, we opted for a drink at Popular Bar, called “The Pop” by locals. Inside, it looks straight out of 1972 with wood paneled walls and at least five pool tables. This place is loved by pool players and we saw more than one person with their own stick.

They put the Nuggets playoff game on one of the televisions for us but we were the only ones watching as it seemed like everyone was here to play pool.

For our last dinner in Craig, we opted to return to Gino’s. They have a tiny, adorable bar and we bellied up. After the Nuggets game ended (they put it on TV for us here too) we began a conversation with an oil worker named John. For the last eight months of his current contract, he’s been driving down from Wyoming to the “big city” of Craig to get a pizza at Gino’s about twice per month. The town he’s living in has one gas station and no restaurants.

I ordered the special, Vodka alla Chicken, and Ryan ordered the fish and chips. I rarely get pasta because I  cook it a lot at home but my meal was tasty.

For our restaurant breakfasts, we went to Village Inn and Cool Water Grille. I was quite impressed with Craig’s Village Inn. It appears to be a gathering spot for older locals who want to shoot the breeze and the manager knew everyone who came in.

There was also a gathering like this at Cool Water Grille where the owner appeared to know everyone who walked in the door. Both our breakfasts were satisfactory but Village Inn’s new chicken and biscuits was a cut above, although Cool Water Grille had scrumptious green chile.

Craig isn’t known as a culinary capital but we proved that you can find good eats where ever you travel and I always find stories. Here it’s about community; a place where everyone knows your name and it was nice to be in such a town, if only for a while.

As a closing note, we were off-grid in much of the area, meaning that internet service was sketchy or nonexistent. In some place in Northwest Colorado, a  cell phone is simply a photography device because you can’t even make a phone call. Plan accordingly.

NOTE: Craig is now home to a satellite branch of Yampa Valley Brewing Company. They were opening the weekend after we were in town. It’s located downtown with a patio overlooking the park. The original is 20 minutes east of town in Hayden, Colorado.

Thank you to Candlewood Suites Craig and Visit Moffat County for hosting us on this trip.

The Colorado Hot Springs You’ve Never Heard of near Craig

Living History in the San Luis Valley of Colorado, Part One

I miss #festivals. And this one in particular. Re