I am going to tell you about the places we ate in Pueblo, although we definitely want to go back with eating as a priority. You see, this is an diverse town when it comes to food. There was a lot of Italian immigration here in the 1800s and these Italians brought with them great food culture. In fact, most of the farms we visited during our farm tour were owned by Italian families.

In Pueblo, the Italian mixed with local Hispanic influences and you get a Croatian twist. Yes, all three ethnicities are here, and over time, this has made the cuisine of Pueblo particularly unique.

We could see this food eccentricity at the chile festival. For instance, one Mexican food vendor was serving a sausage in a tortilla. This is something I had never seen before and although I could be wrong, it seemed to be a Pueblo-thing.

Somewhat appropriately, because I’ve long associated Pueblo with Mexican restaurants, our first dinner here was at a Mexican restaurant in the Bessemer Park area of the town which is also known as Bojon Town. This is where the Croatians settled in the late 1800s.

I have gleaned my information from our tour with Frontier Pathways and the Internet. There isn’t a lot I can find on Bojon Town on the Web, but it is a fascinating piece of Pueblo’s history. I’d like to go back and eat my way through Bojon.

RELATED: Fall in Love with Pueblo, Part One: Chile Festival

We had a wait for a table, so we made our way to the Klamm’s Shell Bar & Cafe for a before-dinner drink. I don’t know the complete history of this place but by the photos of Frank Sinatra on the walls, it’s been around for a while.

Ryan got his first schooner of beer here. Apparently, schooners of beer are wildly popular in Pueblo. Some day I will get to the bottom of this but in all my Colorado travels (and beyond) I had never heard of a schooner until we were in Pueblo. Ryan’s mother, who’s grandfather owned a bar in Nebraska remembers beer coming in a schooner there.

We ate dinner at Jorge’s Sombrero, a favorite of many locals. An order of roasted jalapeno strips can be ordered here like chips and I love them. Even though we had a huge table, service was fast and efficient and the food was good.

For breakfast the next day, we walked from our hotel making our way across the Arkansas River to the historic south side of Pueblo. There are big, wide streets here that were laid out with carriages in mind. In fact, General Palmer, the man who planned this area, was also responsible for the layout of Colorado Springs. He’s also known for co-owning the Denver & Rio Grande Western Railroad.

We ate at The Pantry Restaurant with seemingly everyone in Pueblo that day. It was an incredibly popular place during the chile fest but since there were only two of us, we got a table right away. Food was simple, unassuming diner fare, but good and affordable. I could tell that this restaurant is definitely a staple of Pueblo breakfast life.

Lunch was a tradition slopper and schooner of beer at Gray’s Coors Tavern. I have friends from Pueblo and they insisted that I make this stop. The slopper is said to have been invented at this tavern in the 1950s. For those of you who don’t know, a slopper is a burger served open-faced and smothered in green chile.

Unfortunately, I had a migraine attack and we had to take the food-to-go, but not before we sat at this famous bar. Gray’s Coors Tavern has a Cheers-like feel and is definitely a Pueblo must-stop.

We had intended to do Italian food for dinner, however, the Italian restaurant downtown in the festival zone was closed due to the festival, so we had to make other plans on the fly. We ended up at D.C.’s on B Street.

The location is ideal, at one end of downtown and across from the stunning train depot. It’s also on the corner of Neon Alley, a place that will get its own blog post in the future.

RELATED: Road Trip Food: How to Find Great Food Along the Way

DC’s on B Street has a sort of library crossed with a speakeasy feel. There are books everywhere and the place has a comfy ambiance. It’s a little fancy with dinner entrees running $20 to $35.

We shared the blue crab appetizer and the Strawberry & Walnut salad topped with steak medallions. They split the salad for us without adding a split plate fee.

I give the food two enthusiastic thumbs up. Not only was everything delicious, we each got plenty of steak with the salad. Dessert was strawberry rhubarb pie with ice cream. We had the best server who represented her town well.

Because our afternoon had been hindered by a migraine and because we are gluttons, later that evening we got a second dinner at the festival. My eye had been on a particular taco stand all day; the one selling the sausage tortilla. We had to order tacos and I am glad we did. They were yummy street tacos. 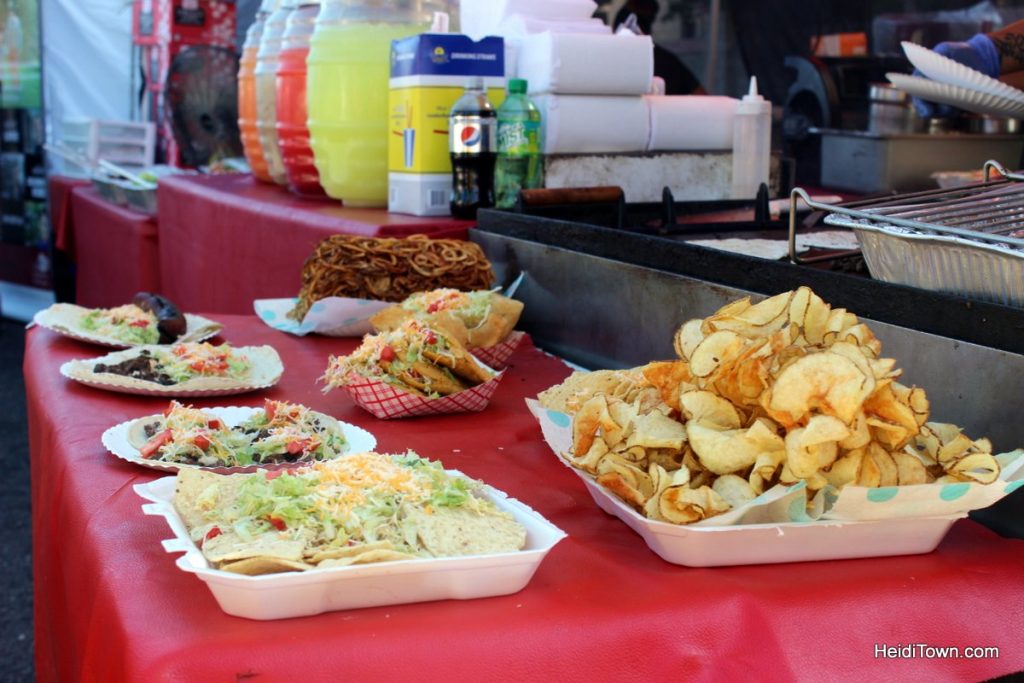 The next morning, we had what might be our best meal of the trip at Milberger Farms. This is an indoor farm market and restaurant on what locals refer to as “the mesa.” The restaurant is set up inside the farm market with tables scattered about and a few booths.

Many of their meals are served with a green chile on the side, which makes my heart happy and may be why I consider this the best meal I had in Pueblo. I had the Pueblo Cakes and Ryan got the French Toast which he declared were the finest he’d had in a long time. High praise from a French Toast connoisseur.

Milberger serves breakfast and lunch and has a bakery. I’d eat here weekly if I lived in the area.

We can’t wait to go back to Pueblo and explore more restaurants. After all, it’s not always easy to find such an eclectic spectrum of cuisine in one Colorado town.

Our home base in Pueblo, Colorado was the Courtyard by Marriott. Its location in downtown was ideal for exploring and attending the chile festival. We were able to walk back to our hotel periodically during our exploration of downtown.

Thank you to Visit Pueblo Convention & Visitor’s Bureau for hosting my stay at the Courtyard by Marriott.