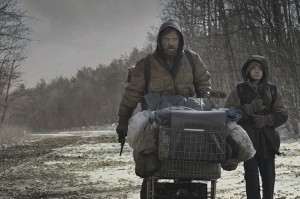 Heidi’s Illustrious Rating: 3.5 out of 5

It’s the end of the world as we know it, and the characters simply known as Father and Son are in a struggle for survival against terrible odds.

The movie is based on the critically acclaimed book by author Cormac McCarthy. McCarthy also wrote “No Country for Old Men.” That movie swept the Academy Awards in 2007, picking up a win in the Best Picture, Best Director, Best Adapted Screenplay and Best Supporting Actor categories.

McCarthy enjoys exploring the dark side of the human condition, and “The Road” is no exception. Whereas, “No Country,” had some humor, there are no laughs to be found in “The Road.”

The living world has died. There are no animals, no insects, no living plants, nothing but fires, earthquakes and a few starving humans savaging the earth. The landscape is bleak and therefore every scene is filmed in shades of gray and brown. The movie offers no explanation as to what has caused the earth to die, we only know that it has.

Most of the humans left on earth seem to have lost all remnants of their previously civilized condition, yet the Father wants seeks to hold fast to his own humanity and longs to instill this in his son. Yet the Son, about 10-years-old, was born into this world and knows no other.

Father and Son are heading south to the sea, hoping to discover something other than what they have left behind. Perhaps “south” will be different. Better. Happy. Their journey is difficult and dangerous. There’s no food, and everyone they meet is a potential enemy. The Father carries a gun  with only  two bullets, but that might be all he needs.

We know very little about the two main characters, but ironically this story isn’t about the two main characters. It’s a story about their relationship, the bond between a father and son, not necessarily this father and son, but all fathers and sons. What will a father do to protect his only offspring? What won’t he do? And it explores this theme under the most brutal setting imaginable.

“The Road” will most likely be recognized by the Academy in several categories. With this year featuring ten Best Picture nominees, I won’t be surprised if it makes the cut. However, I believe if “The Road” walks away with any Oscars, it will be for Viggo Mortensen gut-wrenching performance as the Father, or Kodi Smit-McPhee for his touching portrayal of the Son.

Ultimately “The Road” is severely depressing, and I can’t honestly recommend it because I walked out of the theater wanting to wash the entire story from my mind as quickly as possible. Yet it is well acted, well directed and it has depth, and in the end, I must admit it is worthy of praise.