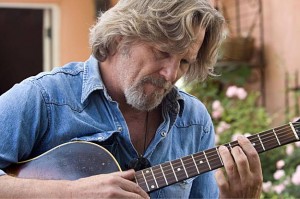 Word of Warning: It’s helpful if you already like country music, because this story unfolds like a country song. Also, the R-rating is mostly about language and adult-themes, such as alcoholism. In my opinion, this one hardly merits the R-rating.

Hollywood’s gone country in this all-too familiar story of one man’s hard  fall from fame. The story isn’t new, in fact we saw another version of it just a year ago in “The Wrestler.”

Despite the clichÃ© storyline “Crazy Heart” is above average because of the music and a solid performance by Jeff Bridges. Bridges plays Bad Blake, a drunk, washed up country music star who has gone from playing the big stages to playing the bowling alley. Country music has changed, but Bad Blake hasn’t and he also hasn’t  written a new song in three years.

After being interviewed by a young music reporter named Jean (Maggie Gyllenhaal), the two began a romantic affair (which is more than a little unsettling because she looks about thirty years his junior). The relationship helps Blake find his long lost inspiration, but doesn’t  inspire him to  put down the bottle.

“Crazy Heart” is based on a novel written in 1987, by Thomas Cobb. The film was originally slated to go direct-to-DVD, but it was picked up by Fox Searchlight Pictures and opened in limited release in December 2009.

The small film has been making big waves, due in part to Bridges picking up the best actor Golden Globe for his performance as Bad Black, and scoring a best actor Oscar nomination. Bridges has never won an Oscar, despite four previous nominations.

Many of the actors sing in the movie, including Jeff Bridges. In fact, Bridges is quite an accomplished singer/songwriter and guitarist. Even more surprising is Colin Farrell, who has a small role in “Crazy Heart” as big time country star. The Irish bad boy happens to have a great singing voice.

With sweeping scenes of the southwest and a toe-tapping soundtrack “Crazy Heart” is definitely worth the price of admission.