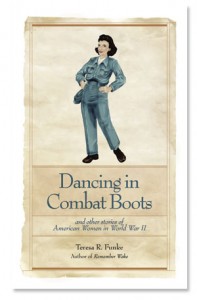 This show caught my eye not only because it’s such an intriguing topic, but the performer is a local writer. Teresa Funke, of Fort Collins, worked as a researcher for PBS and her essays and short stories have appeared in numerous commercial and literary magazines and anthologies.

Today, Funke is the author of four books, and she is a speaker, presenter and writer’s coach.

Funke’s book “Dancing in Combat Boots: Stories of American Women in WWII” is the inspiration for her one woman show called Dancing in Combat Boots. Funke writes that the book, eight years in the making, was a “labor of love.” The book contains eleven fictional stories based on real women during WWII, including Irene who bucks rivets in an aircraft factory and Marjorie who survives the Japanese attack on Pearl Harbor.

“Dancing in Combat Boots” was a 2008 Colorado Book Award Finalist and won the 2007 EVVY Award for juvenile fiction and cover design. The book celebrates the roles woman played during WWII, a role often overlooked by history.

In Funke’s show the women from her book come alive – their hopes, their struggles and their courage.

See the show on Sunday, October 3, 2010 from 2:30 to 4:30 p.m. at the Fort Collins Senior Center. A question and answer session and a meet-the-author reception will follow the performance. Donuts and coffee will be served.

The Fort Collins Senior Center is located at 1200 Raintree Drive. This show is open to the public and is for all ages. Admission is $14 for senior center members and $16 for non-members. Learn more about Teresa Funke and her books at www.TeresaFunke.com.

Fritzi is a huge fan of @antlersvail. This is her