Have you ever visited a place where the birds don’t soar above you, but below? Welcome to Colorado’s Black Canyon of the Gunnison National Park. 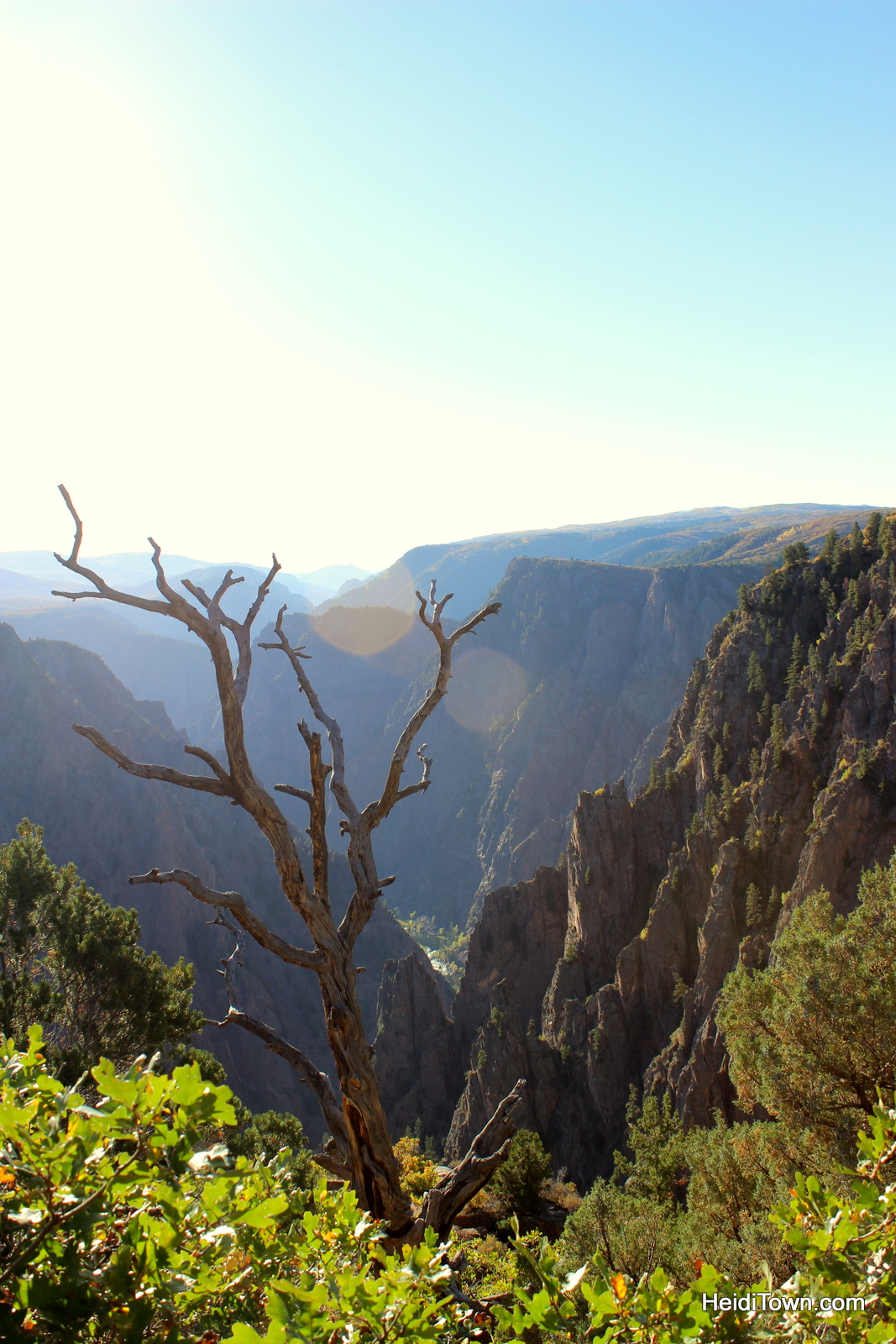 We have driven by this National Park many times and once we stopped briefly on the north end to peer into the abyss. However, we’d never had the time to go into the park.

When I booked our trip to Montrose to cover Oktoberfest, I knew this was our chance to explore this Colorado National Park. After all, the park entrance is just 20 minutes outside of Montrose making this a must-do excursion when you visit the town.

Ryan and I got to the park early on a Saturday while the sunlight was still soft and the birds were just awakening. After a long and fascinating discussion with the Visitor Center’s park rangers about water and the history of the canyon we set out on the Oak Flat Loop Trail (2 miles roundtrip). Note: Take advantage of Park Rangers. They are wealth of information and they are there to share that info with you. 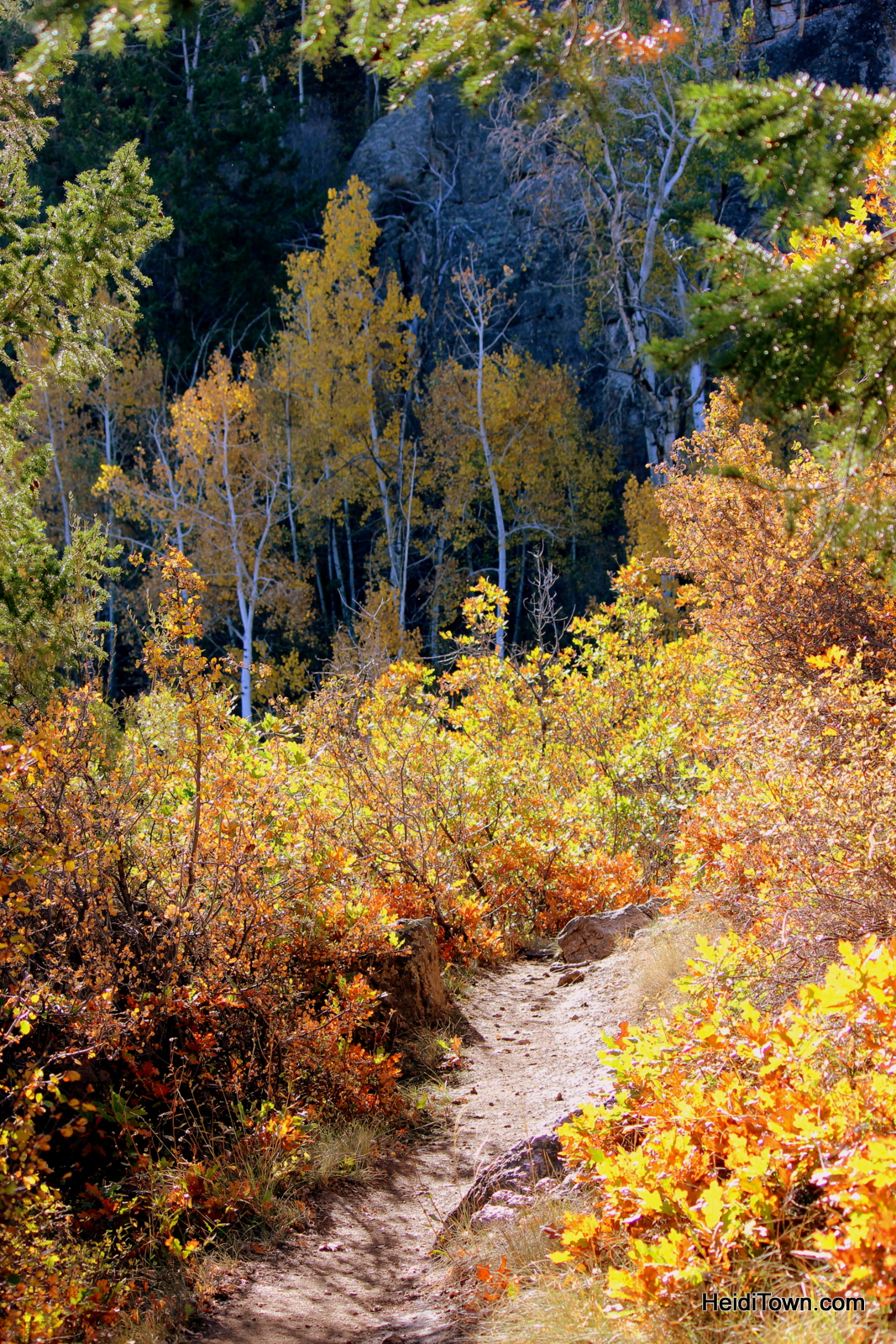 Less than a half-mile in we scared up some wildlife. A bird flapped wildly into a nearby tree. From our vantage point it looked like a goose, but we knew that wasn’t right. We took photographs and later a ranger helped us identify it as a dusky grouse.

The morning light filtered through the trees as we walked. Around every corner I stopped to take photos; a perfectly round tree tunnel, a grove of aspens alight with the morning sun, a stunning overlook of the canyon wall. 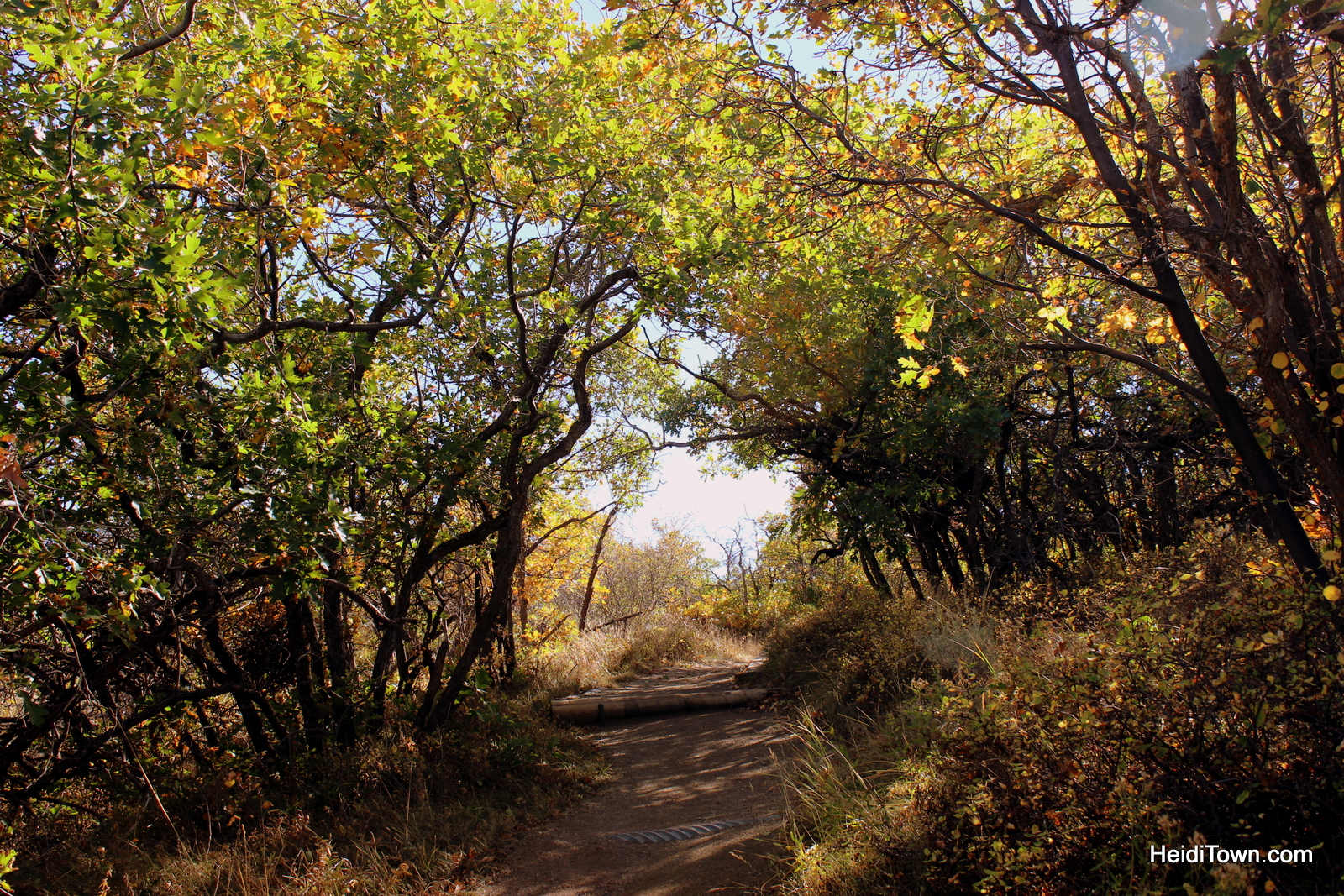 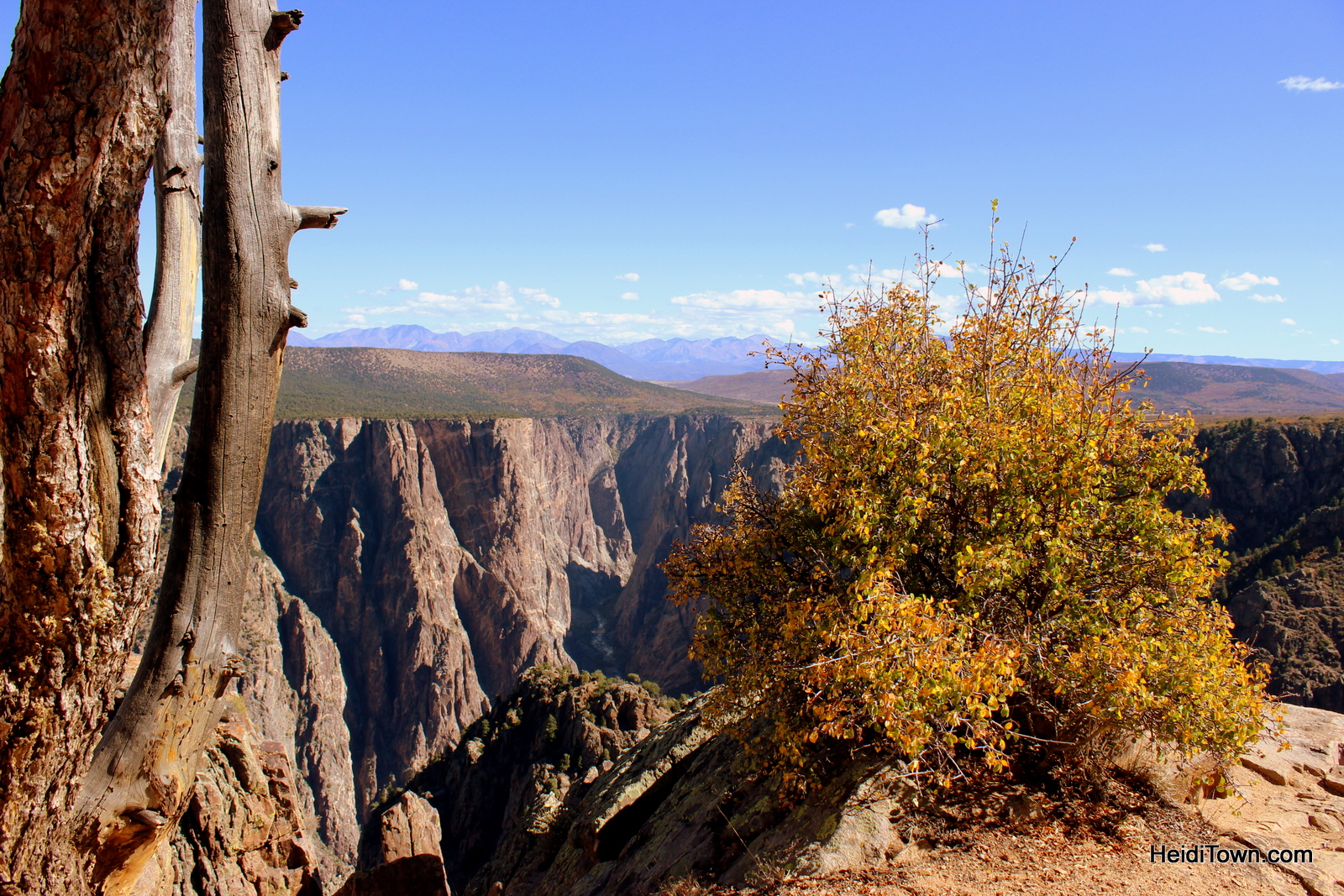 The hike is rated as strenuous and as one of the rangers said, it’s a leg burner, but doable if you get regular exercise.

Back at the visitors center we decided to drive the length of the canyon, stopping occasionally to stare down into the picturesque canyon and take photographs.

The canyon has been created over two million years by the Gunnison River which runs along the bottom. It features some of the oldest rocks in North America and it also has some of the steepest cliffs and craggiest spires.

Breathtaking may be an overused word when describing canyons, but the Black Canyon of the Gunnison will take your breath away. And at about 8,000 feet above sea level along the rim, a hike here will legitimately leave you oxygen deprived.

Our second destination was the Warner Point Nature Trail, a moderate, 1.5 mile round trip hike with views of the San Juan Mountain Range, Uncompahgre Valley and Bostwick Park to the south and the West Elk Mountains to the north. At the turn around spot you’ll be rewarded with views of the canyon and the Gunnison River. 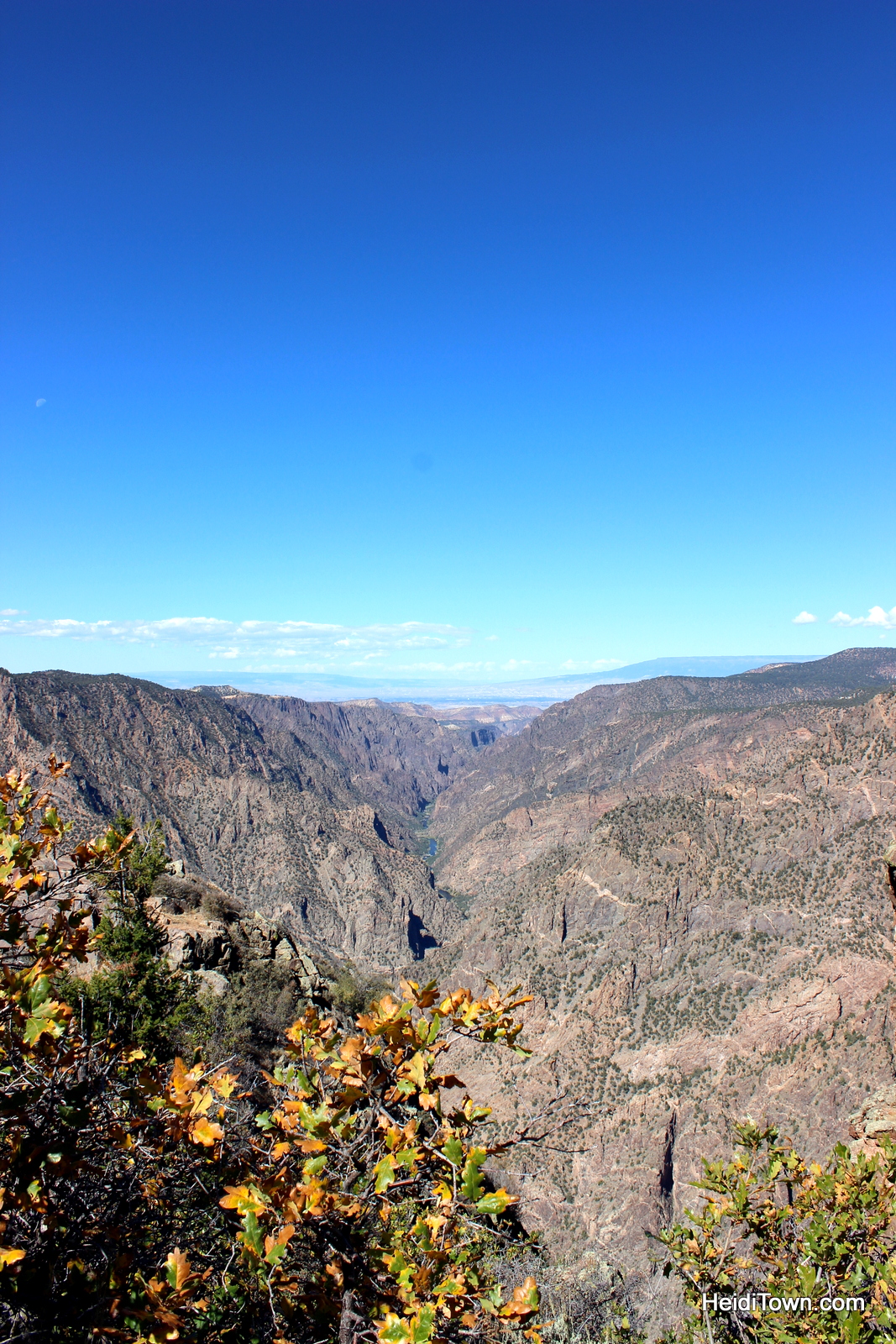 As we drove out of the park around 11:30 a.m. we were thankful to have arrived early because even in October the place was filling up. Compared to other National Parks, Black Canyon of the Gunnison isn’t crowded, but a visit in the morning will allow you to have the park mostly to yourself.

On our way back to Montrose I turned to Ryan and said, “That was one of the best mornings ever!” And I truly meant it. A morning spent hiking in the splendid glory of nature are hours well spent.

Interesting facts about the Black Canyon of the Gunnison National Park

Hiking trails in the Black Canyon of the Gunnison National Park