I love riding bikes. I know this because at the end of a ride my teeth are covered in bugs and grit from smiling widely during my outing, but that’s okay – totally worth it. Riding a bike is one of the last things that genuinely makes me feel like a kid again. 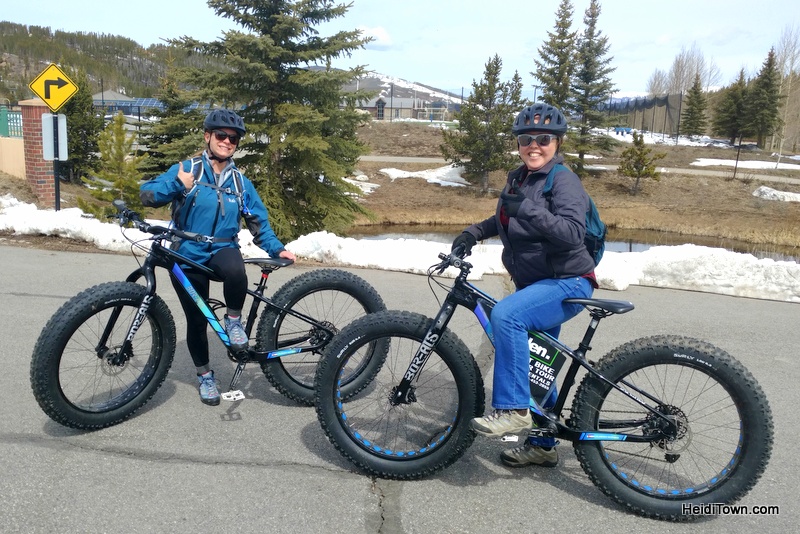 This past weekend, I got to experience the best of both worlds during a fat bike tour with Ridden – I rode a bike that made me feel ten again and I took full advantage of being an adult because our bike ride destination was Breckenridge Distillery and Broken Compass Brewery.

We met up with our tour guide, Ashley Mahs at Ridden, a cool downtown sports shop selling new and used gear and providing rentals. Ridden started offering guided fat bike tours this winter, and participants get to ride brand new Borealis fat bikes that are made in Colorado Springs. 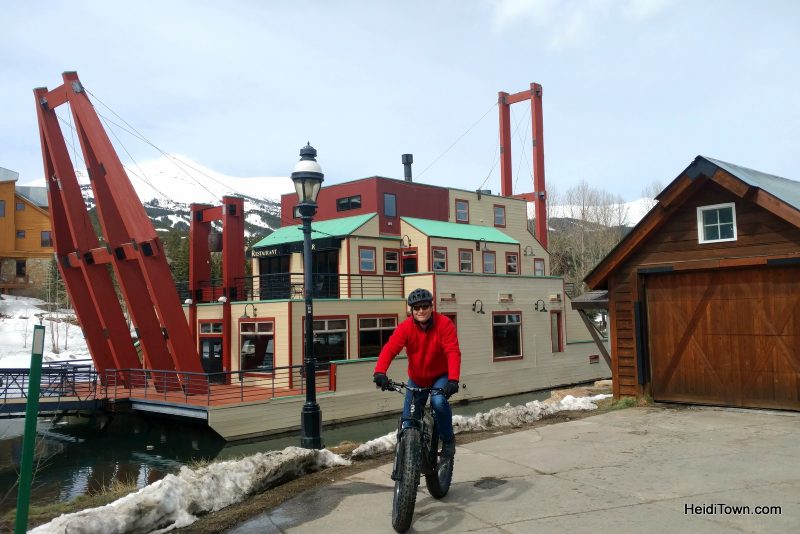 I was skeptical about riding a fat bike. It seemed like the ride would be squishy and slow. I was wrong. These bikes are awesome and lighter than my old hybrid in the garage.

Despite snow earlier in the week, the bike path was dry, so we didn’t have to navigate any snow or ice, which wouldn’t have been a problem on our fat bikes, but I wasn’t too sad that there wasn’t any snow to shed. I’m more of easy-does-it sort of bike rider.

We sailed down the bike path, following the Blue River north out of downtown Breckenridge. It’s about three and a half miles from Ridden to Breckenridge Distillery with nearly 80% of the ride on a paved pedestrian/bike path.

We arrived at Breckenridge Distillery’s beautiful new building where we were stopping to take a distillery tour. 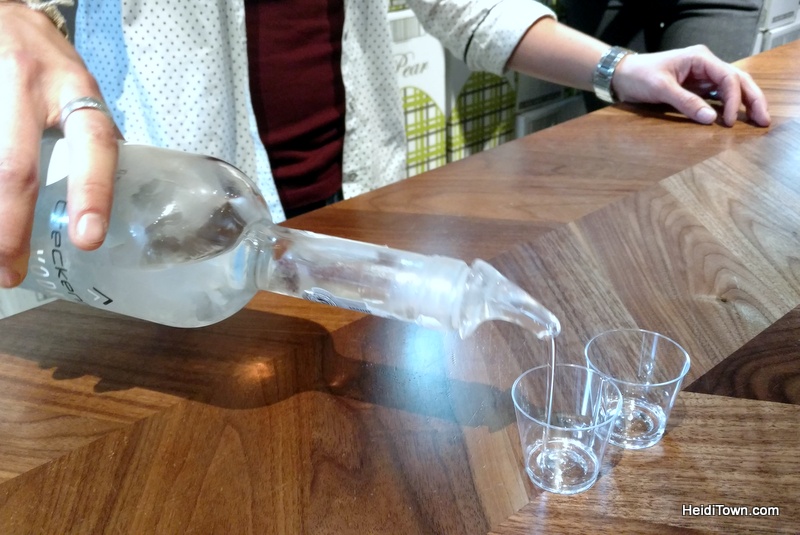 First, we tasted Breckenridge Distillery’s light spirits and then we got a behind the scenes tour. This is a large production distillery, after all, their spirits are available in 48 states and, here’s a fun fact, they provide all those tiny liquor bottles on Frontier Airlines flights.

After taking a look at the production side of the business, we returned to the tasting room to try Breckenridge Distillery’s darker spirits like one of my favorites, their popular bourbon.

Anyone can take a tour here and it’s a free, although I would encourage you to tip your tour guide. Our guide, Amber, really knew her stuff and gave us a great tour. 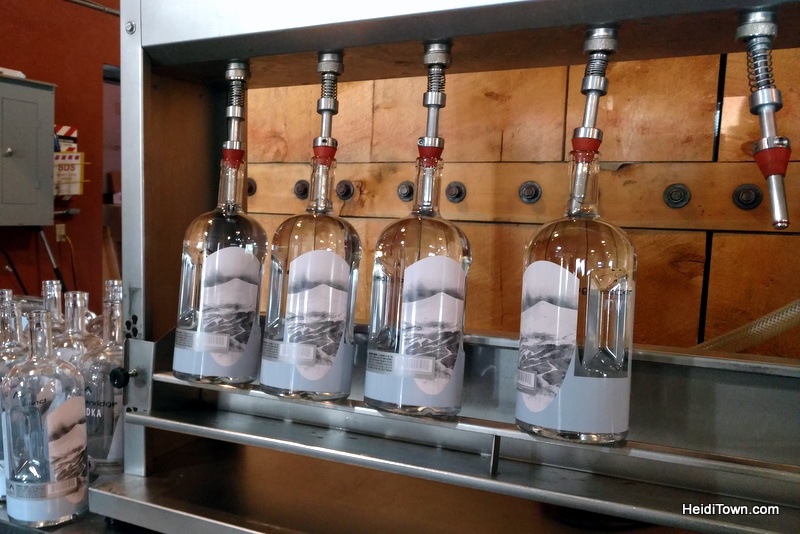 Our next stop, Broken Compass Brewery, was just a quick ride away. I’ve known the owners here for the good part of a decade, and it’s been amazing to watch their business take off. They are great people and it doesn’t hurt that they make excellent beer.

Their GABF medal winning coconut porter is a real crowd pleaser, but on a springlike April day, after my complimentary taster provided with my Ridden tour, I ordered a hefeweizen, which hit the spot. 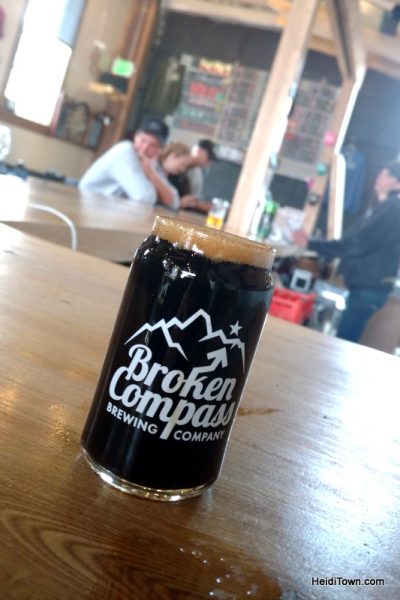 This was our final stop on our fat bike tour. After our beer at Broken Compass, Rob Catalano, owner of Ridden, picked the three of us up, and the bikes, and returned us to his downtown shop. 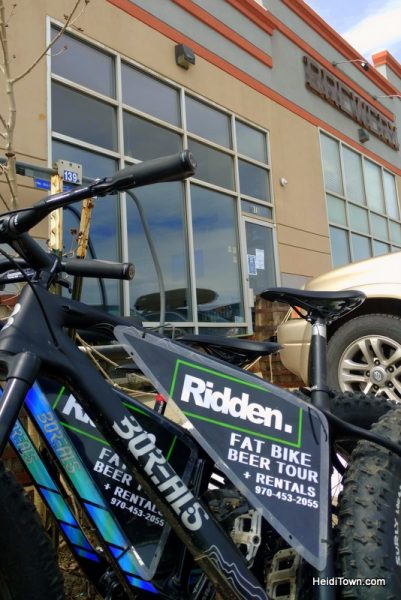 These fat bike tours (book here) happen year round and this is a fun thing to do in Breckenridge even if you are already familiar with the town. Additional tours that feature art, food and wine are in the works, so keep tabs on Ridden’s website and Facebook page for details.

Thank you to GoBreck and Ridden for providing this complimentary fat bikes tour for us. And thank you to Ashley for being a wonderful guide.

A Staycation at Hilton Denver Inverness in the Denver Tech Center