I do not usually review hikes on HeidiTown, but we came upon The Grottos Trail rather unexpectedly and had such a good time, I thought it deserved to be highlighted. 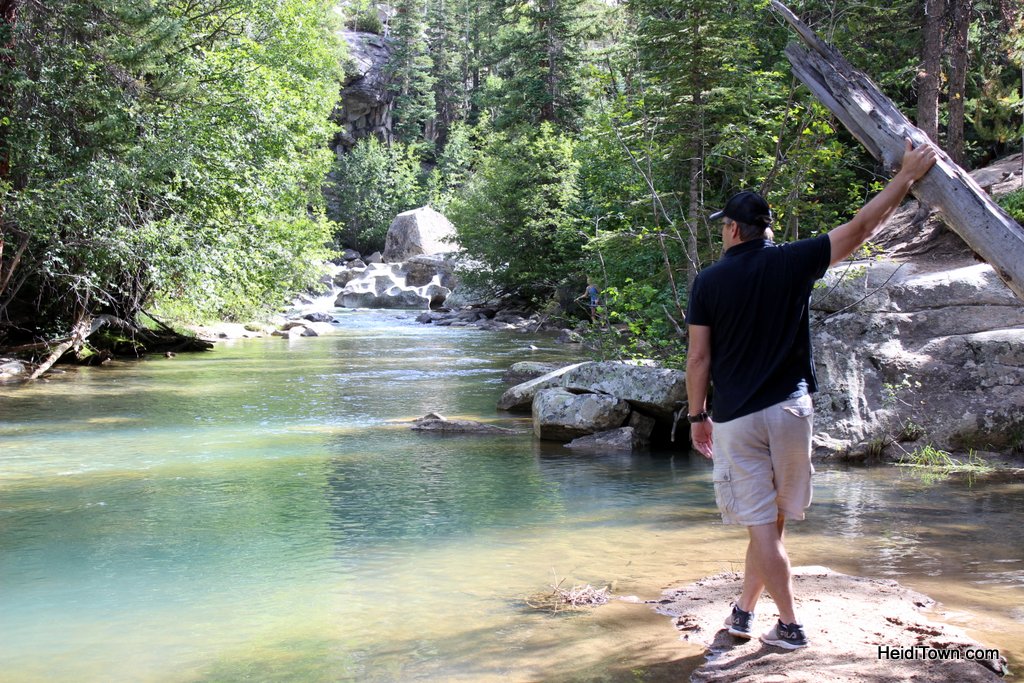 We spent a wonderful three-nights at the Limelight Hotel in Snowmass last week and decided to head home to Colorado’s Front Range via Independence Pass. A lot of Snowmass and Aspen locals take this route in the summer. They claim it is a shorter drive to Denver than driving through Glenwood Springs to I70. However, I think it is just more relaxing because my map app indicates that it is around 20 minutes longer. 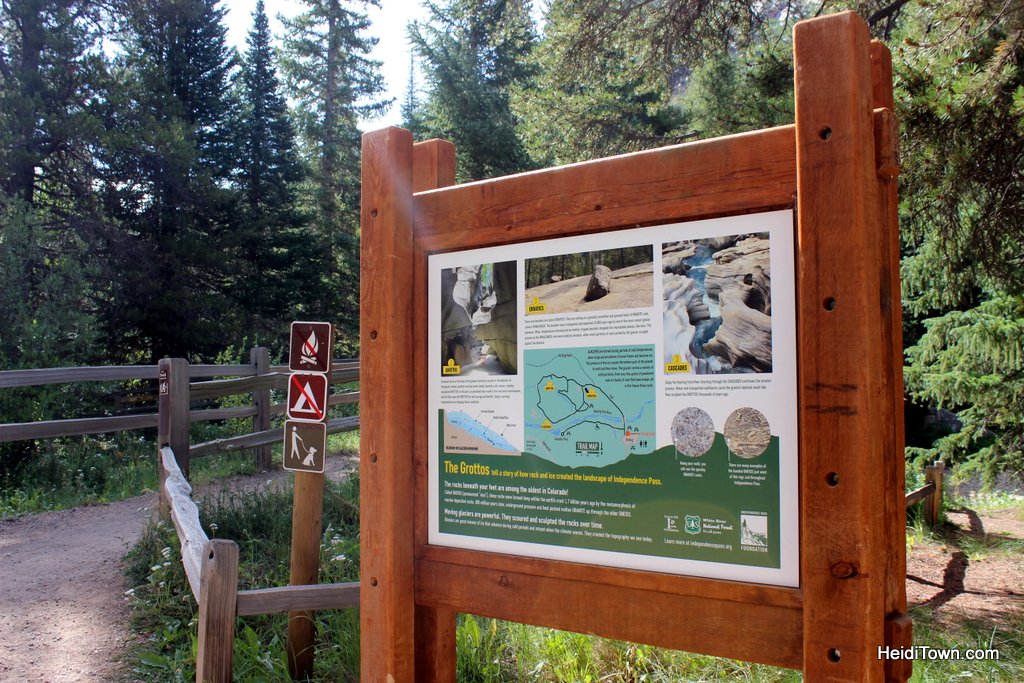 We hadn’t intended to stop and hike but when we pulled into the parking area the trail looked intriguing. Ahead were caves and waterfalls, so we were in, despite the fact that I was wearing not wearing trail appropriate shoes.

Thankfully, The Grottos Trail is just a 1.1-mile loop, although if you aren’t used to hiking at altitude, take it easy and come prepared with water and proper foot attire. 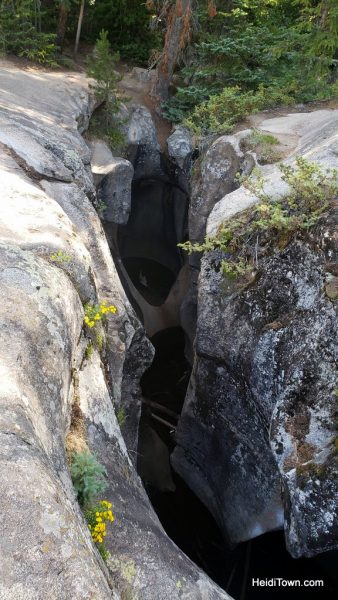 We set out and came upon the Ice Caves rather quickly. Of course, Ryan explored the inside of the caves while I stayed on top. Over thousands of years, water has carved the rock away here forming a labyrinth of caves. Depending on the time of year, it was shallow during our late August visit, the water is at differing depths in the caves and there could be ice through July. 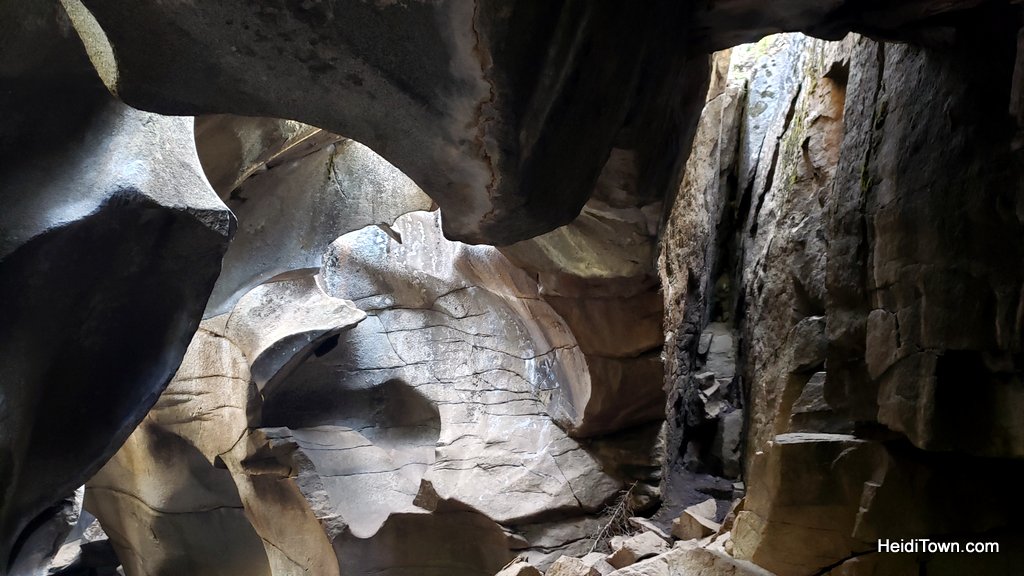 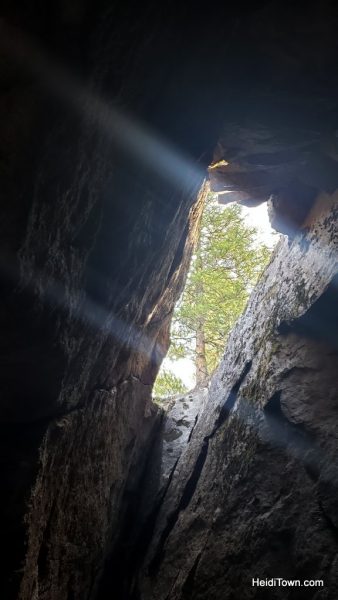 Upon exiting the cave area, it is easy to lose the trail, so be careful to follow the cairns and look for path markers along the way. 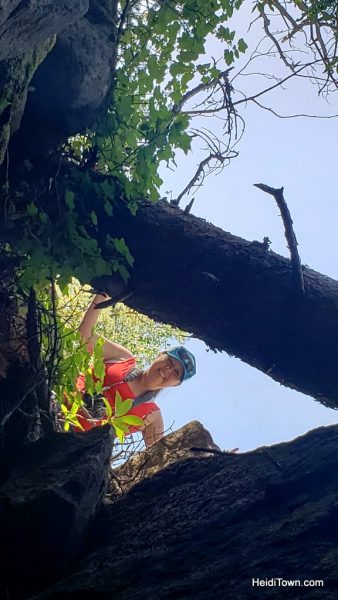 Next, we happened upon the Cascades, the waterfall section of trail. The Roaring Fork River flows over, around and across big, smooth boulders. This is probably one of the prettiest series of waterfalls I’ve seen in Colorado.

In August, the pools of water were magical. They were an otherworldly color that bordered on turquoise flecked with diamonds. We stopped awhile, hopping carefully from rock to rock to get just the right view.

We followed the trail along the river, spotting hikers who had seemingly materialized around us. This is, after all, a trail that’s just 20 minutes outside of Aspen and it’s wildly popular.

When we arrived at 9:15 a.m. we were the third vehicle in The Grottos Trail lot and by the time we returned to our car, vehicles were parallel parked on the dirt roadway leading to the trailhead parking lot. If you’d like to have the caves to yourself and avoid strangers in your waterfall photos, arrive early.

There are picnic areas here, making it the perfect area to shake off the road trip cobwebs, have a snack and stretch one’s legs. 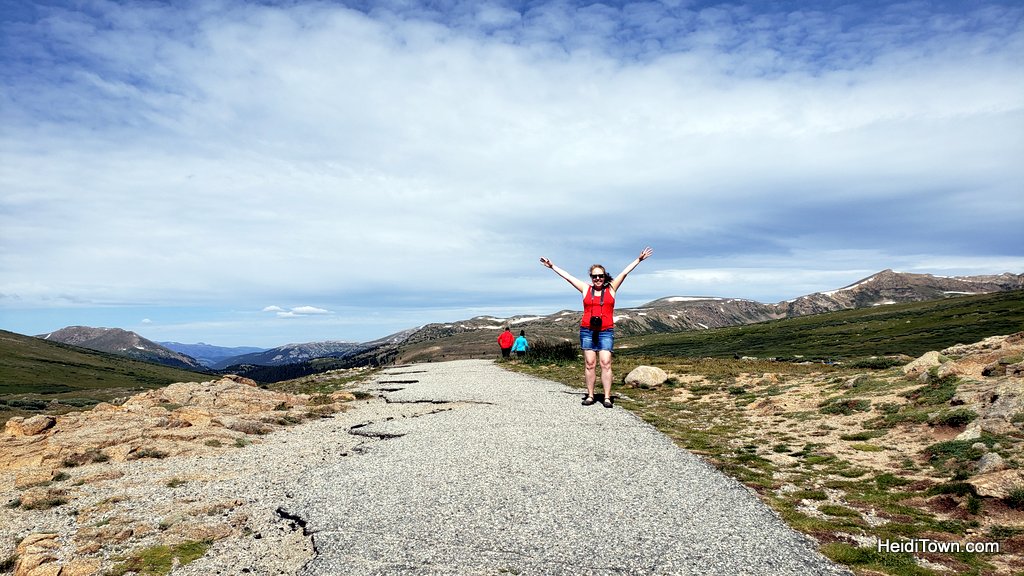 Another 22 minutes past The Grottos Trail and CO-82 arrives at the summit of Independence Pass, 12,095 feet above sea level. It was blustery on the day we visited but it is well worth walking the short distance to the viewpoint to witnesses one of the most iconic vistas in the Rocky Mountains.

Please note that Independence Pass closes in the winter and has travel restrictions in the summer. Visit here for additional information.

Happy 4th of July weekend!!! I love the flags in