Make your Southwest Colorado vacation one to remember by taking a trail ride in one of the most spectacular spots in the world. Not only will you be riding in the same area as John Wayne, but also in the long shadows of all those who have come before us, many seeking fortune and fame in these rugged mountains.

By the way, if you love John Wayne, eat a meal at The Outlaw in downtown Ouray. Not only is the food delicious (get the trout) but Mr. Wayne used to come here during the filming of “True Grit” (1969) and they have his cowboy hat on the wall as proof.

After a big breakfast of bacon, eggs, and pancakes at The China Clipper, Ryan and I were fueled up for a trail ride. We drove for about 10 minutes before we arrived at the Ouray Horseback Ride spot for Action Adventure Trail Rides. Having driven uphill, the view was already magnificent, but it would get even better.

RELATED: Where to Stay & What to Eat in Ouray, Colorado

Already saddled and ready to go, Gunther, a sorrel and a beautiful buckskin named Dish, stood swishing their tails patiently. This is one of the side benefits of a guided trail ride, your horse is ready to go when you arrive. No need to saddle or cinch.

Justin Mitchell, is the cowboy who owns this outfit, and there are around 100 horses on his Ridgway ranch. Having bred them and trained them, he knows each horse well. I can write that our two horses were a delight to ride.

Justin got his start guiding hunts, and then, about five years ago, he started horseback tours in Ouray. He offers trail rides in Ouray and at Red Mountain, up the Million Dollar Highway.

Jace, Justin’s son, joined us on the ride and we set out in a line up the road. If he or one of his sisters should take on ownership of the ranch one day, Jace would be the 6th generation owner. Jace and Ryan hit it off immediately and spent most of the ride chatting.

It had been a wet June, and colorful flowers, columbines, and lupines, in particular, dotted the green landscape with blue. While a ride here is breathtakingly beautiful, heading out on the trail with Justin is a real treat. Since he grew up here and his father grew up here and so on and so forth, he knows this land and its stories better than anyone I’ve met in the area. In fact, this was the unexpected benefit of this ride.

RELATED: Kicking Back in Cowboy Boots at Vee Bar Guest Ranch in Wyoming

I’ve been horseback riding off and on since childhood, however, I am not always comfortable atop a horse. However, I employed every technique I had learned from Brent Kilmer, the owner of Vee Bar Ranch in Wyoming. It was the best riding lesson I have ever received and it has made every ride since then a pleasure, especially this one.

We plodded through meadows and then up, up, up. In fact, it felt like we would soon arrive at the top of the world, and I was glad that Gunther is more surefooted than me. We’d gone on the “Adventure Ride” and this was the adventure part. Thankfully, Gunther got me safely to the top of the world. 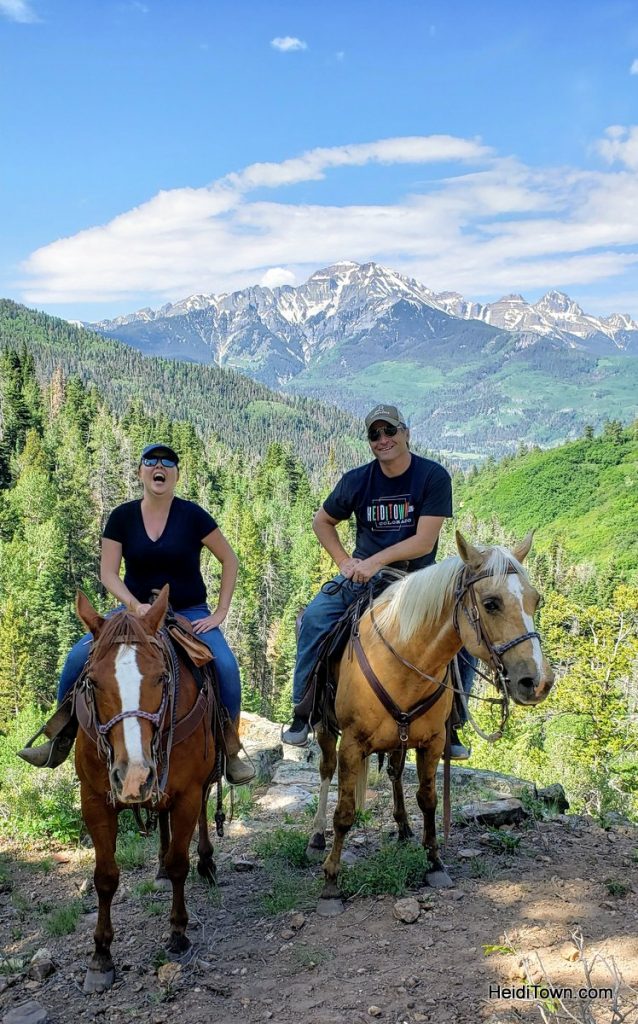 After stopping to take photos (Justin is a stellar photographer), we worked our way back down the mountain and across a stream, full from late snow melt. We stopped here to let our horses get a long drink. There is a visceral link between humans and horses, after all, we’ve been riding them for thousands of years. I could feel that connection on this ride.

I am not going to get all woo-woo on you, but I think the majesty of the scenery and the calmness of my horse, Gunther, made this a day I will remember for a long time.

Back at our load up site, Jace was greeted by Ellie, and I knew instantly this was his dog. Dogs are another animal irrevocably connected to humans. A relationship I get to celebrate every day.

One of the reasons that Ouray has played such a big role in my life is that Ryan and I associate the town with stopping to smell the flowers. Yes, I have actually smelled flowers in the garden of The China Clipper, but I mean it figuratively. A trail ride here is a chance to do just that and it’s a wonderful opportunity to see the majesty of the San Juan Mountains. Plus, as a bonus, you’ll learn a little history along the way.

Action Adventures, a 36-year-old company, is online at ActionAdventures.net.

Thank you for hosting us, AA!

Why to Bring the Dog to Snow Mountain Ranch, Colorado