If you have ever driven Hwy 133 from Carbondale to McClure Pass, you might have seen it. Just past the coke ovens in Redstone, Colorado, a castle is tucked up against the mountains to the east.

I have always wondered about it, and last summer, thanks to a magazine assignment, I stayed there. You see, after a great deal of remodeling, that required time and lots of money, the castle is now a bed and breakfast.

Built in 1902, Redstone Castle, originally called Cleveholm Manor or Osgood Castle, is by all accounts the Downton Abbey of the Rocky Mountains (my moniker). The television show followed the life of the Crawley family, keepers of a beautiful English estate. The show is set in 1912-1926, almost the identical time that Redstone Castle was in its prime. 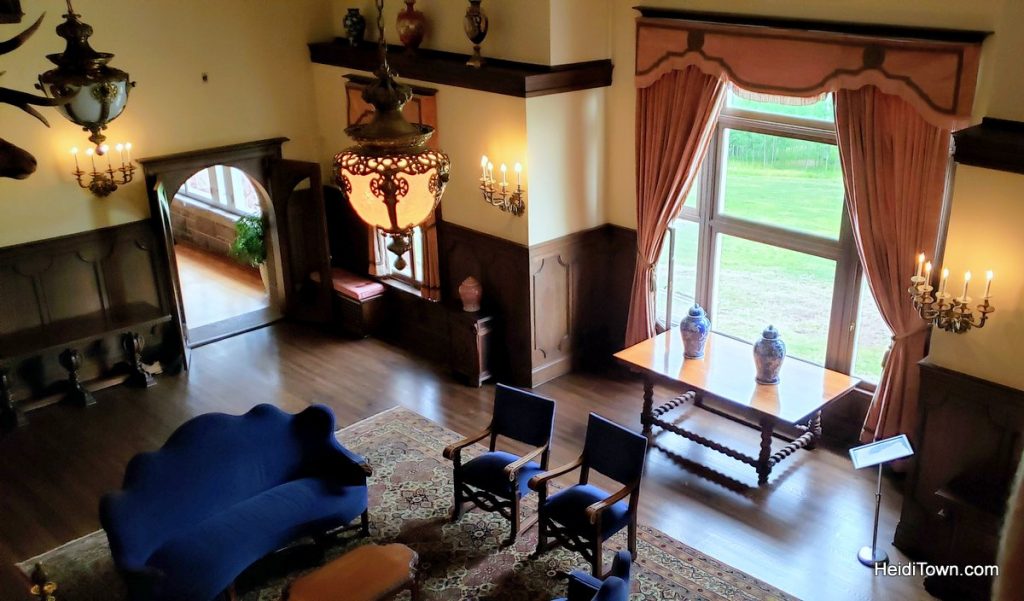 I could write an entire (long) article about the history of the place, but you can learn the short version on the castle’s website. Here is the extra short version.

RELATED: Experience the Magic of Avalanche Ranch in Redstone, Colorado

Designed in a Tudor style, at one time this castle had more than 20 staff members. When built, the 23,000 square foot castle rivaled anything found in Colorado or in any other part of the Rocky Mountains.

This place makes a picture-perfect getaway, especially for fans of Downton Abbey who, due to COVID-19, won’t be making it to England anytime soon. Not only does it feel like time moves slowly at the castle, it feels like it’s another time period entirely. Each room has been painstakingly refurbished with the original design top of mind.

Today, it looks much as it did when the original owner, John Cleveland Osgood vacationed there (it was never his permanent home). Osgood built it as a hunting retreat, and it is located on the hill so that he could survey his Western Kingdom including the coke ovens, and the village of Redstone below (which he also had built for his workers). The guy was rich, really rich, ranking as the sixth wealthiest man in the United States at the time.

We stayed in the Sunshine Suite. It has two rooms plus a bathroom and was the original servants’ dining room and butler’s quarters. Can it get more Downton Abbey than that? There is even a servant call system hanging on the wall outside the room.

This super sunny suite looks out across the castle’s manicured lawn through a fantastic wall of windows. There are two fireplaces in the suite as well as a writing desk. It is easy to imagine writing my Pulitzer Prize-winning novel here.

There is no television in this suite which makes it feel even more authentic. See beautiful photographs of all the suites here.

A stay comes with an appetizer/drinks hour outside and a private tour of the former residence which is a must for any guest of the castle. The tour is an excellent way to learn about this unique Colorado castle. A stay also includes breakfast on the sun porch. We enjoyed fat sausage, a waffle, scrambled eggs, and of course, I had tea. One always has tea while staying at a castle.

Note: Due to COVID-19, appetizer plates are pre-made for each guest. Also, all tables are six feet apart.

We enjoyed exploring outside the castle during our stay. We took a lovely stroll down Lover’s Lane, next to the splashing Crystal River. It features a rock wall that Osgood had built. We also went upstairs in the riverside gazebo where hummingbirds buzzed by our heads. Osgood had the gazebo built for one of his wives (he had three).

The property is large and in the evening deer often tiptoe their way through the castles expansive front yard.

In addition to being a bed and breakfast, the castle can be reserved for weddings, receptions and other events. Here are the details.

Most people make the castle a place to celebrate special occasions like anniversaries, birthdays, etc. However, isn’t staying in a castle special enough? And if you are a fan of Downton Abbey, Redstone Castle should be on your bucket list.

One Night in Laramie, Wyoming: A Green Chile to Remember

Three Tips for How to Oktoberfest in the Time of Coronavirus