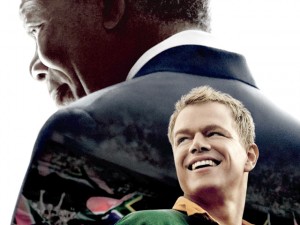 Word of Warning: None

In my opinion, “Invictus” is one of the best movies of the year. Probably not Best Picture, but since ten films are being nominated in the category this year, it will likely be in the mix.

Based on true events, this film tells the story of newly elected South African President Nelson Mandela’s endeavor to unite his bitterly divided nation over the sport of rugby. During the years of apartheid, the South Africa National rugby team, the Springboks, were seen as the white’s team. Black South Africans either rooted for other rugby teams, including England’s team, or they preferred soccer.

Mandela was officially inaugurated President of South Africa on May 10, 1994. South Africa was to host the 1995 Rugby World Cup, but the team was doing poorly. This movie tells the story of how President Mandela used his power to help the Springboks create a better team and in turn, united the country, both black and white, behind the team in their attempt to make a run for the World Cup.

Directed by Clint Eastwood, upon the request of Morgan Freeman, the movie isn’t a directorial standout. As far as direction and cinematography it is straightforward, with many predictable scenes. However, despite the rather conventional filmmaking it is a solid movie with good performances.

Morgan Freeman will likely receive a Best Actor nomination for his portrayal of the international recognized Nelson Mandela. He is able to captures Mandela’s quiet, yet undeniably powerful personality. Matt Damon plays Springbok team captain Francois Pienaar, who is portrayed in the movie as becoming increasingly aware of the part his team is playing in uniting South Africa’s white and black communities. Damon does a fine job, though his South African accent is a bit sketchy at different times during the movie.

As a side note, “Invictus” is the name of a poem by English poet William Ernest Henley that inspired Nelson Mandela during his 27 year imprisonment. Mandela uses the poem to motivate team captain Pienaar in the months leading up to the World Cup.

At its core, “Invictus” is a really good underdog sports story, with lots of rugby action and pep talks sprinkled throughout the two hour and 14 minute movie. My one complaint about “Invictus” was the musical score. I know, as does everyone, this movie is about more than just a sport, and I didn’t need the overly sappy soundtrack pounding this into my head.

Ultimately, my take away from this film is that sports can bring people together. Religion and skin color may tear us a part, but if you want to unite a nation, nothing works better than a team sport. Just look at the Olympics; Americans never feel more patriotic and nationalistic than during the Summer and Winter Olympics. Perhaps the answer to our differences isn’t more politics, its more sports.