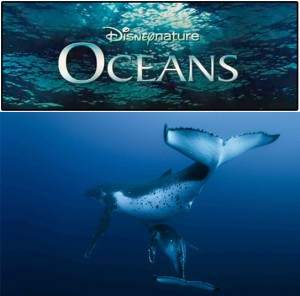 Word of Warning: No warning. I think everyone, including children, should see this movie.

I have had a special bond with the ocean since childhood. In fact, I was born in a Southern Oregon hospital that is perched high on a hilltop overlooking the Pacific. The ocean is something I’ve always loved and respected, and I feel extremely lucky to have grown up along its shores.

When I was a little girl, I wanted to study oceans. In fact, while other children looked up to rock stars, football players or astronauts, my hero was a marine biologist who worked at the local interpretive center.

I now live 1200 miles from the  nearest ocean  and I didn’t become a marine biologist, but I never lost my awe and admiration for the sea. Over the years I’ve watched hundreds of documentaries about the ocean, so I was excited when I heard about Disney new film.

Disneynature released “Oceans” on April 22, Earth Day. Disneynature is an independent film label of Walt Disney Company with its headquarters in France. Its first film was “Earth” in 2009.

Disneynature didn’t skimp on this production. The budget was 50 million euros, or 66 million dollars. The film explores five oceans, was shot in 50 different places and took over four years to film.

The quality of the film is breathtaking. The audience is transported to a world unlike anything they’ve ever experienced. Okay, that’s a bit of an exaggeration. If you’ve watched as many nature shows as I have, you’ve probably seen most of what is captures in this film, however, seeing it on big screen is a different kind of experience.

From diving birds to hermit crabs, to the exquisite blanket octopus and silvery swirling balls of sardines, “Oceans” is a true feast for the eyes, and leaves no ocean stone unturned. My only complaint with this 103-minute film is that I didn’t learn more. While it’s visually stunning, the narration seemed to lapse at times when I really wanted to know what I was seeing on the screen.

There is a subtle environmental message in “Oceans,” and while it’s not hard-hitting enough for some, I felt it was just about right. If this film beat people over the head with a message, many would leave the theater angered, feeling they’d just been attacked by another preachy eco-flick. I believe, if people care about a subject such as the ocean, the desire to protect that subject will follow, and I think “Oceans” will inspire that sort of concern in those who see it, especially children.

Despite a few scenes depicting the cycle of life – Orcas and sharks hunting seals – this is an ideal film for all ages. It won’t be in theater much longer, so plan accordingly.