High clouds and lots of sunshine guided our way from Craig to Sand Wash Basin several weeks ago. We saw more cows than cars as we drove Hwy 40 through Maybell and then turned slight north on Hwy 318.

The only traffic we encountered on this road was a flock of sheep that were being moved from one pasture to another.

It was apparent that they’d spent some time being herded down Hwy 318 as evidenced by droppings on the roadway. Thankfully, the sheep and herders were taking a break alongside their dogs and horses and as we slowly drove past the sheep gawked at us.

We didn’t know what to expect as we entered Sand Wash Basin which encompasses 154,940 acres of Bureau of Land Management (BLM) land, 1,960 acres of private land and 840 acres of state land. I hoped we’d see wild horses but I wasn’t holding my breath.

We were in Moffat County, the most westerly and northerly county in Colorado. Bordering Wyoming and Utah, it is three million acres, two-thirds of which are public land open to all types of recreational activity. The county is also home to Dinosaur National Monument.

RELATED: Escape the Crowds This Summer by Visiting a National Monument

The BLM operates million of acres of land in the west, and as of March 1, 2018, the wild horse and burro population on public lands was estimated at approximately 81,950 animals, triple the size the land can support. Learn more here.

I am not going to delve into the issues surrounding wild horses, but I would like to thank Sand Wash Basin Wild Horse Advocate Team (SWAT) for providing some of the photographs for this article. We met SWAT the day after our visit to Sand Wash Basin and I would encourage you to learn more about their mission by following their Facebook page.

Sand Wash Basin is home to around 700 wild horses but we weren’t sure if we’d see any. I knew it was quite rare to see horses in the wild in Colorado. The bands that roam in other areas of our state are quite shy and are often difficult to find.

We were immediately thankful that we’d driven Ryan’s new Toyota Tacoma. Driving a four-wheel drive onto Sand Wash Basin will make life much easier. We are sure that the BMW sedan we saw on the route had to turn around at some point because the dirt roads get rough.

This is wide open, wild country, but there were a few RVs and campers inside the basin when we arrived. This is a popular place for anyone with a vehicle like an ATV or dirt bike.

It had rained for several days before our visit which made the road muddy in places but had turned the basin minty green. Everywhere new life was sprouting up from the squishy ground. The soil here is clay and spots on the ground feels quite springy, like walking on a giant sponge.

Our first sighting was easy because several cars were pulled over so we figured there must be wild horses visible. There were. A small band made its way through Juniper covered hills near the side of the dirt road. I was excited as I snapped away with the Canon. 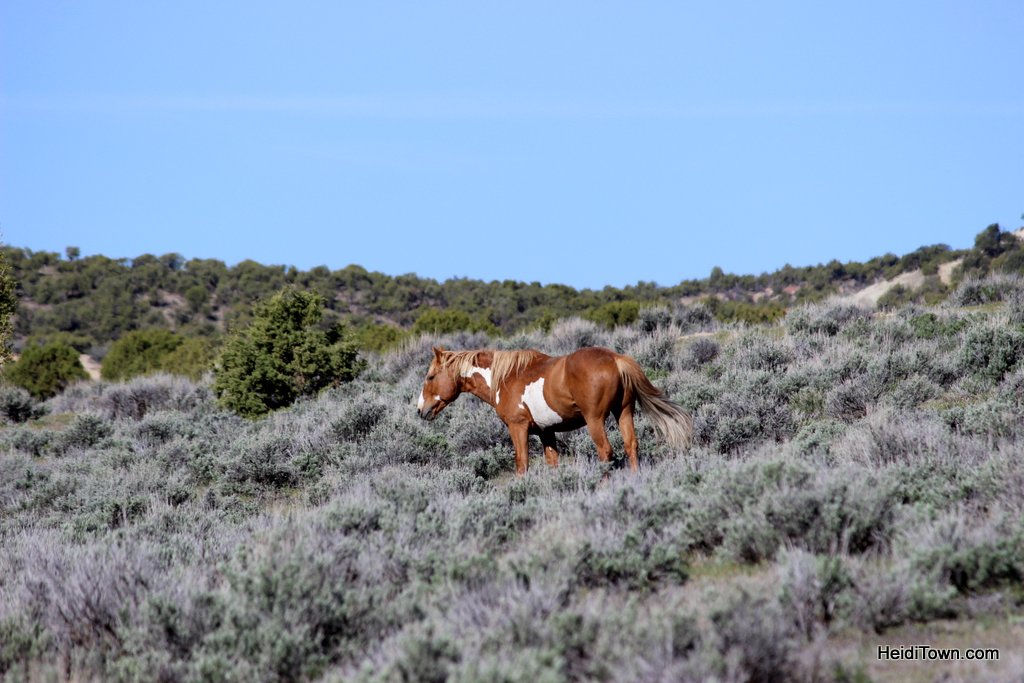 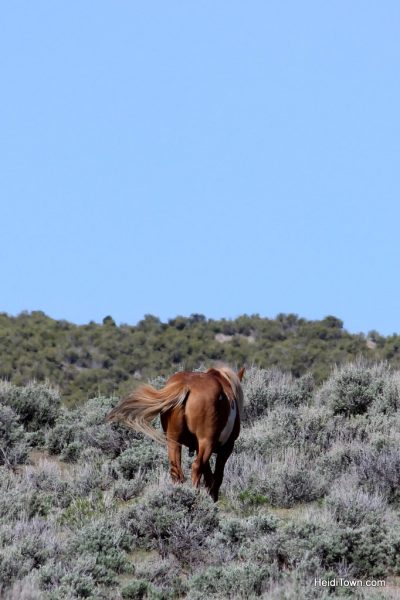 A little further along and a white horse blocked the road. He seemed unbothered by the two cars that stopped to snap photos. He finally moved a bit to the side allowing the small back up of vehicles to pass.

At this point the road got tricky and I have no doubt that anyone driving a sedan would have to turn back. To drive in Sand Wash Basin a vehicle need clearance and the ability to get through some boggy areas, especially after rain.

Continuing on the road paid off. It curved to the right and to our left were acres and acres of land stretching to the horizon. We saw dozens of wild horses here. These groups included 40 to 50 horses each and the herds dotted the landscape. In fact, when I figured out what I was looking for horses materialize out of thin air.

We set up the scope and found even more horses were grazing in the great expanse that lay before us.

As we drove back towards Hwy 318, still deep within the basin, we spied a large herd and stopped to watch. A jeep was parked on the far side of the herd and we all had a good view without being obtrusively close. There were several foals in this group of about forty horses.

As we watched, a young stallion tried to lure away two red mares, both with white blazes down their faces. I don’t blame him, these gals were lookers. Another stallion, probably an older male that had already claimed the mares, chased the young stallion away and shepherded the two reds back to the group.

We’d just read about this behavior on an interpretive sign, so it was fascinating to see this play out in real life. There was no fighting but a definite jostling for authority. Interestingly, the two stallions actually looked similar, both grullo in coloring, they could have been related.

We watched this herd for quite some time and I think the man in the Jeep got some fabulous photos. He had a camera with a ginormous lens and I suspected he was professional, at least more professional than me. Sand Wash Basin is popular with photographers and several Facebook pages are dedicated to photos of these horses.

We wound our way back to Hwy 318 and stopped at every interpretive sign along the way. Installed last year, they tell the story of the horses, ecology, fossils and plant life in the area. Interestingly, Sand Wash Basin used to be the site of a shallow ocean with lots of prehistoric plant life.

In Northwest Colorado and Sand Wash Basin, one can embrace the west in all her glory. From the canyons of Dinosaur National Park to the large unfettered Yampa River, this is where the west lives.

I’ve written a few articles about wild horses but these are the first I’ve seen in the wild. Born and raised in the west, I love the west intensely, but I realized that the issue surrounding wild horses is not without controversy.

One of the best articles I’ve found on the topic was in the National Geographic online called “The Future of America’s Wild Horses: The Options.”

And here’s a good article in the Craig Daily Press about the history of wild horses in Northwest Colorado.

Thank you to Candlewood Suites Craig and Visit Moffat County for hosting us on this trip.

FYI: There is no admission fee to Sand Wash Basin.

A Little Vacation in a Tiny Home in Lyons, Colorado