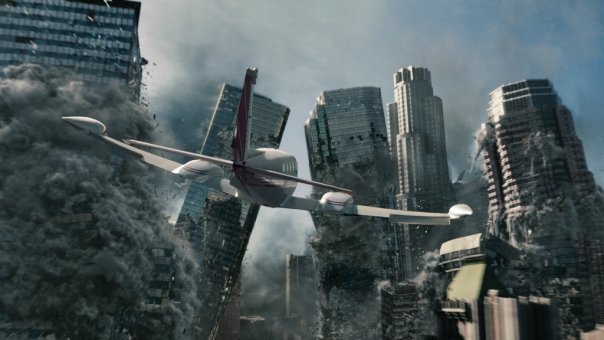 Back in 1996, Roland Emmerich probably never would have guessed that the film “Independence Day” would define his career. Emmerich is still trying to destroy the heck out of the world in his new opus simply titled “2012.”

In 2009, a scientist discovers that the Earth’s temperature is rising due to something about neutrinos being too high. He calls upon colleague Dr. Adrian Helmsley (Chiwetel Ejiofor) to help him solve the mystery behind this strange phenomenon. They calculate that Earth’s temperature will continue to rise until the world as we know it starts breaking apart like a bad science project.

This takes us to the titular year, and down-on-his-luck writer/limo driver Jackson Curtis (John Cusack) wants a relationship with his estranged son and daughter. As any good dad would do, Jackson takes them camping, but coincidentally discovers part of the government’s cover-up of Earth’s impending disaster. After that, “2012” is all about three things: death, destruction, and good old-fashioned global chaos.

It’s hard to discuss acting when disaster films are involved. Much like slasher films, the audience only demands that the actors look believable while running away from the doom chasing them. Luckily, the cast of “2012” is up to the challenge.

As the biggest name in the cast, Cusack’s performance in this film shows a constant cross between fear and disbelief. I guess I would look frightened yet befuddled too if entire cities were breaking apart behind me like giant slabs of Styrofoam. On the other side of the nobility coin is the criminally underrated Ejiofor. He has been a leading man-in-waiting for a few years now, starting back with “Dirty Pretty Things” and continuing with films like “Inside Man” and “Children of Men.” If Cusack is the perspective of the audience, Ejiofor is both its beating heart and its conscience.

Standout supporting turns from Oliver Platt and Thandie Newton elevate the film greatly and give its emotional moments just as much urgency as the carnage that follows behind. The true hero of this film, however, is none other than Mr. Woody Harrelson. Between “No Country For Old Men,” “Zombieland,” and now “2012,” Woody’s back and stealing scenes more than ever. Good to have you back, Woody!

If you have seen the trailer or any footage of this film, and you’re not on board, don’t bother. The film is two and a half hours of global obliteration. “2012” sets a new standard for disaster films and may require a second viewing just to take in the full panorama of its destructive CGI splendor. Sure, the film is a monument to impossibility, and the plot is convoluted beyond discussion, but we don’t watch these films for their logic. We watch because we love the spectacle of it all.

For all the carnage, however, the character moments ground the film just enough to suppress the cheesiness the film could have had. If a good disaster flick is what you crave, you’ll get your fill in spades with “2012”

Jason Thompson is an aspiring screenwriter from Los Angeles, California. Catch him anytime at his blog www.mysmallpotatoes.wordpress.com.