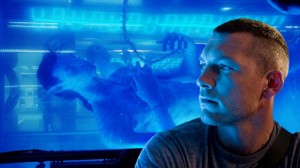 Word of Warning: At nearly 3 hours, it’s a good idea to visit the restroom before settling in for a viewing of “Avatar.”

My husband has been excitedly awaiting this film, so we tried to see it during opening week, but the theater was too packed. We finally saw it last week, but what can I write about “Avatar” that hasn’t already been written?

After standing in a 30-minute line, we  donned our sexy 3D glasses,  only to discover they were filthy. These new, technologically advanced 3D shades are reused by the theater and are suppose to be washed between shows. We tried wiping our glasses clean on our shirts and then settled in for the ride.

And “Avatar” is a ride. The audience is transported to a world 150 years in the future. Having all the destroyed their own planet, mankind is in deep space looking for resources; resources they will do anything to obtain. Anything.

The humans have discovered the planet Pandora. While I thought the world resembled an LSD trip, my husband compared it to a Vegas show. The world is home to a species that has a special connection with their planet. In fact they can literally hook into the world around them by using a special organ inside their hair. I know this sounds weird, and it is. These people, called the Na’vi, culturally resemble Native Americans and look like the cast of Cats.

Because Pandora is toxic to human beings, the humans have created avatars that look like Na’vi. The avatars are consciously connected to their human “drivers.” Allowing the humans to infiltrate the Na’vi tribe.

Of course, Pandora, complete with fierce creatures and glowing plants, has a valuable resource the humans want and need. To keep things simple let’s call this resource “oil.” The “oil” just so happens to be located  directly under one of the Na’vi’s largest and most holy of settlements. Once the humans realize they will be unable to convince the Na’vi to move their settlement, the humans go to Plan B.

We get it Hollywood – we humans are bad – really, really bad. This theme is continually shoved down the viewer’s throat throughout this movie. If you can get past the blatant bashing of human being as a species, the special effects in “Avatar” are worth the extra money to see it.

While the storyline is uninspired and predictable, the graphics are  super duper  cool. Years from now, we will look back at “Avatar” the way we look back at the original “Star Wars.” It will look dated and we will laugh. But today the world sits in awe of what computer geeks are now able to produce and bring to life on a theater screen. Now if only  Hollywood  could have  hired  some  good writers to work on “Avatar.” I guess it’s too much to ask for, this time around.

Note: I was worried about motion sickness, a side effect I’ve experience in both “Beowulf” and “Caroline” in 3D, but thankfully, I didn’t experience any at this movie. I think the more advanced wrap-around 3D glasses helped with this problem.

The top ten films of the decade, according to the Mayor
A HeidiTown Favorite, The Elders, coming to Colorado