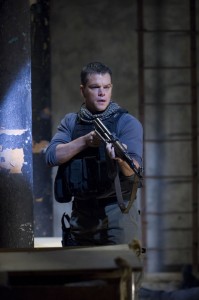 Word of Warning: The viewer may suffer from “Greengrass sickness” (a.k.a. motion sickness).

This Saturday, March 20, 2010, will mark seven years of US troop involvement in Iraq. “Green Zone” takes place exactly seven years ago, during the initial invasion of the country. Matt Damon plays Chief Warrant Officer Roy Miller. He and his men have been given the job of finding Weapons of Mass Destruction, better known as WMDs.

The military on the ground in Iraq has been told there is an informant who has revealed numerous locations where they will discover storehouses of WMDs, but as Miller and his men inspect site after site and come up empty handed, Miller begins to question the legitimacy of the intelligence.

When Miller openly questions the validity of the intelligence in a briefing he is shut down by his superiors but his inquiry catches the eye a CIA man named Brown (Brendan Gleeson). Brown has also been questioning the intelligence about WMDs, and expects it was intended to send the American’s on a wild goose chase. In a seemingly downright unrealistic move Brown recruits Miller to seek out the truth.

Greg Kinnear plays Clark Poundstone, the non-military government official who appears to be linked to the intelligence that in question. Amy Ryan plays the Wall Street Journal journalist who is covering the WMD story.

The main problem with this movie is the fact that we all know the outcome. There were no WMDs in Iraq. Our troops were on a wild goose chase. Since there is little character development and we know the ending, the movie lacks significant suspense.

There are some tense moments in “Green Zone,” and I enjoyed the screenwriter’s addition of an Iraqi civilian recruited by Miller to help translate. But overall, this movie is missing something. Perhaps it’s relevancy. The subject matter of the film is no longer top of mind for most Americans. I’m not suggesting that it isn’t historically relevant, or that we can’t learn from our mistakes, but it’s just not timely.

I have no doubt some will walk away from this movie believing it is a true story. Even though we now know the truth about WMDs in Iraq, and we know there were big lies and cover ups leading up to the war in Iraq,  the actual storyline of “Green Zone” is a total work of fiction.

If the “Green Zone” had come out five years ago, perhaps it would feel more germane; as it is, I felt a little disconnected and at times a little bored. I’d suggest waiting until this one comes to DVD.

Interesting note: The move stars a handful of real Iraq veterans and some soldiers who are still enlisted. This is a good way to save money; you don’t have to spend time teaching a bunch of Hollywood extras how to properly hold a gun.

Warning to those who suffer from Greengrass sickness, a.k.a motion sickness: The “green” in “Green Zone” stands for the color I turn while watching Paul Greengrass’ crazy, jostling camera work. I had the same problem during the Bourne movies. In the action scenes, this style of direction tends to be confusing; I can’t decipher what is going on in the scene. I realize this what Greengass is known for, but I am definitely not a fan.