If you haven’t been to the Denver Zoo in a while, it’s a great time to go. The new Toyota Elephant Passage has opened and being a huge fan of the zoo, I had to go and check it out for myself, and for my HeidiTown citizens, of course.

I borrowed a friend’s 10-year-old so I didn’t look like the crazy kid-less lady at the zoo. I chose to take a kid who is as wild about wildlife as I am; and I’m not kidding, this girl reads animal encyclopedias for fun and she knew more about apes then one of the zoo volunteers we ran into.

Our smartest decision was to go first thing in the morning. Arriving at the zoo early is probably the best piece of advice you are going to get from reading this blog post. We arrived at the zoo as it opened at 9 a.m. on a Wednesday, and made our way straight to the Elephant Passage. This exhibit is so popular right now that they do timed entries so that they can keep the crowds manageable.

Due to our intelligent decision to arrive early, there were no crowds at Elephant Passage at 9:20 a.m. and we were able to leisurely stroll through the massive exhibit. It feels as though you are walking through an Asian village, complete with a real rickshaw and other props that transport you to the other side of the globe.

Another good reason to get to the zoo early is that the animals tend to be more active in the morning. Later in the day they head to their dens and under shrubberies to escape the noonday sun. As we entered the Elephant Passage at the Village Outpost we spied some young, spunky clouded leopards that were interacting with zoo keepers.

As we worked our way through the exhibit, there seemed to be elephants every which way we turned, as well as water. I love all the water features in the Elephant Passage and so do the geese that seem to think this is the perfect place in which to bring up their offspring – much to my delight there were baby goslings everywhere. 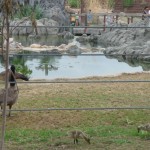 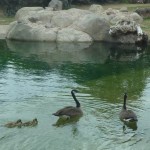 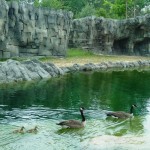 The Schoelzel Family Village is the hub of Elephant Passage, and has a fascinating flying fox exhibit. Did you know that the wing span of a flying fox can be six feet? Inside this indoor exhibit you can also see Asian small clawed otters, always a hit with the spectators, and fishing cats, although these guys were hiding out while we were there.

Our favorite part of Elephant Passage was the Chang Pa Wildlife Preserve. I liked it because it was fantastically photographable and my companion liked it because of the gibbons. These members of the ape family can swing right over visitors’ heads from “island” to “island” in the Chang Pa Wildlife Preserve. They were more interested in picking fleas off of each other while we were watching.

Since both of us had visited the Denver Zoo a number of times, the Elephant Passage was the highlight of this trip, although we toured most of the other parts of the zoo as well. The most exciting part of our day, however, was getting a glimpse of the baby Amur leopard, Makar.

The day before our visit, the eight-week-old cub was introduced for the first time to visitors at the zoo. Curled up with his mother right in front of the viewing area, it was hard to see where the baby leopard ended and where his mother began; those spots work well to camouflage the little guy. Due to poaching, loss of habitat and trophy hunting, less than 40 of these leopards remain in the wilds of Eastern Russia. It’s incredible that this critically endangered species has successfully reproduced at the Denver Zoo.

The Denver Zoo is open every day of the year. Summer hours (March 1 – October 31) are 9 a.m. to 5 p.m., with the grounds officially closing daily at 6 p.m. During winter the zoo is open from 10 a.m. to 4 p.m. Admission is $8 to $15, depending on season and age of the visitor. The best deal is to become a member at DenverZoo.org.

See more pictures we took at the Denver Zoo on HeidiTown’s Facebook page.