Monty Python has always been part of my life, and not just the famous Holy Grail movie. My dad was a true fan, and loved “Monty Python’s Flying Circus,” the television show that aired from 1969-1974. Of course, we watched the shows on videos that we rented from the library during the 80s.

After seeing them as an adult, I am surprised that my parents, who wouldn’t let us watch a PG movie without first approving it, would let us watch skits with lines like, “Shut your festering gob, you tit!” and “My nipples explode with delight!”.

The play, “Spamalot,” first appeared on Broadway in 2005. It was written by Monty Python alum, Eric Idol who “lovingly ripped it off” from “Monty Python and the Holy Grail.” It is a parody of the King Arthur story with lots of references to the Holy Grail. While featuring its own musical score, “Spamalot” inserts songs from other Python movies, including a personal favorite, “Always Look on the Bright Side of Life,” from “Life of Brian,” the best Python film of all, in my opinion. 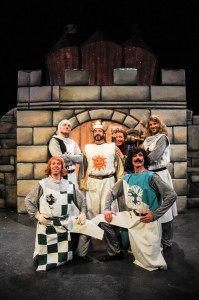 “Spamalot” is on stage now at  Boulder’s Dinner Theatre, and we brought along some friends who had never been to the BDT to take in the show. From the moment we were seated I could tell that this was going to be something completely different. The buzz of the crowd, and the attitude of the staff; everything was just a bit sillier than usual. I knew that we were in for a treat – a super silly, rot-your-teeth and brains-a-little kind of treat.

After a delicious dinner and good conversation, the show got underway and from the first melody, “Fisch Schlapping Song,” until the last, “Find Your Grail,” the onstage antics kept the audience howling and cackling. Yes, we had a cackler. Front row to the left of the stage – her cackles were the best. 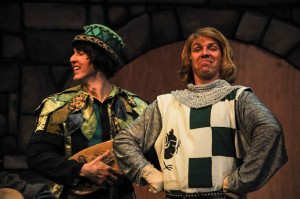 Two of my BDT favorites are in this show. I know we’re not supposed to pick favorites, because all the actors at BDT are good, but Scott Beyette and Bob Hoppe stole my heart when they played Don and Cosmo in the BDT’s 2010 production of “Singing in the Rain.”

In “Spamalot,” much to my delight, Hoppe is brave, brave Sir Robin, and Beyette is Patsy, King Arthur’s side-kick. Both Beyette and Hoppe excel at physical comedy and much of that talent is on display in this energetic production.

Another scene stealer is Alicia Dunfee, who plays the Lady of the Lake, and has some of the best numbers in the show including “The Song that Goes Like This,” which made me laugh every time it was sung, which is often. 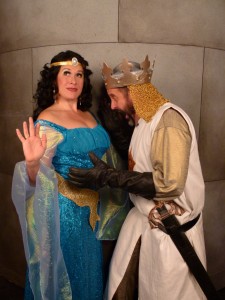 Irreverence is the name of the game with anything Python-related, so don’t bring along any prudish friends or family members to this show. Lines such as, “You won’t succeed on Broadway if you don’t have any Jews” might not play well to an audience that takes themselves too seriously. Thankfully, we had no such people at our show. We all laughed until our faces ached.

As usual, Boulder’s Dinner Theatre has hit a homerun with “Spamalot.” The hilarity ends on March 1, 2014, so get your tickets soon. Go to BouldersDinnerTheatre.com for details.

Ice fishing in Grand Lake, Colorado
HeidiTown on the Radio – February 2014 in Colorado, Part One