Gluttony, it’s not something to be proud of, so it’s a good thing that we ran a 5K while we were in Alamosa, Colorado, because the rest of the time we were eating. You may think I’m exaggerating, but we hit no less than seven restaurants (two of them twice) during our two- night say in this Southern Colorado city of 10,000.

We were in town for the Rio Frio Ice Fest and Rio Frio 5K. The festival theme was Star Wars and I hope that explains some of the photos in this post.

We arrived on a Friday afternoon and soon found ourselves at San Luis Brewing Company, maker of our favorite chile beer, the Valle Caliente. We ordered a couple pints along with a platter of sausages to tide us over until dinner. 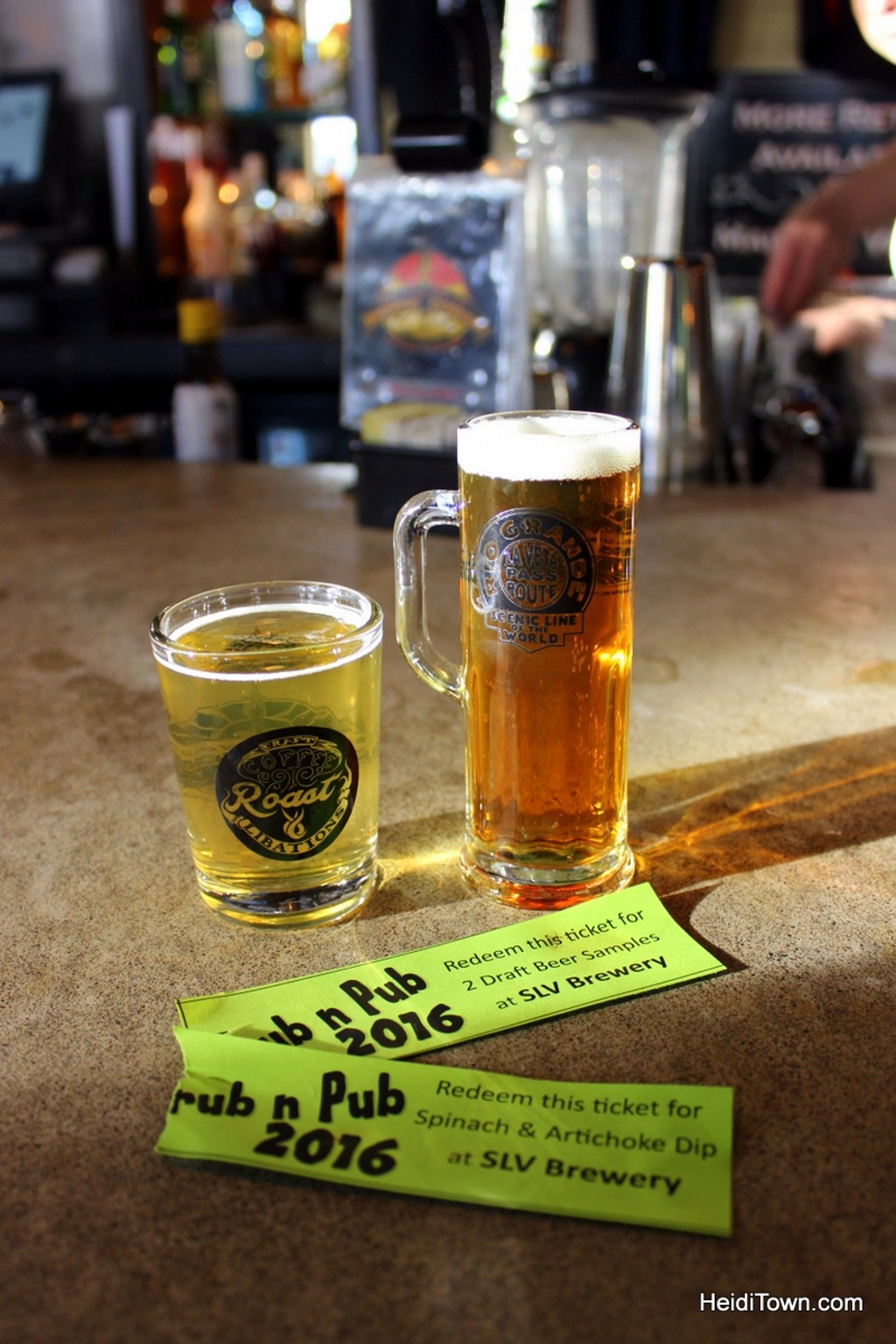 Later that night, after the Rio Frio Fest’s opening party, we headed to The Rubi Slipper. This diner/bar and has about 100 hamburgers on the menu. Okay, maybe not 100, but the most I’ve ever seen, so of course, we ordered hamburgers.

I chose a bunless option; a burger served on a plate of fries and smothered in green chile (I didn’t say it was the healthy option).

The next morning, we took advantage of our hotel’s free breakfast. The Fairfield Inn & Suites Alamosa serves up a nice buffet with several hot items and a friendly host. We rewarded his chipper attitude with a tip.

After running the Rio Frio 5K (I’ve written about that experience here), we were hungry and a little tired, so we got sandwiches at the Wendy’s near our hotel and then relaxed in our comfy hotel room.

That afternoon we visited Hooper, a fantastic outing that I will write about here at a later date.

For dinner we had tickets to Grub & Pub, the Rio Frio Ice Fest’s dining and drinking extravaganza. For $20 each, we had five coupons each that were good for food and drinks at participating downtown restaurants. We had two hours to hit them all and we were determined to do so.

And here’s where the story gets a little glutinous. We started with beer tasters paired with chips and artichoke dip at the San Luis Brewing Company. We then dashed down the street to Bistro Rialto where we had a slice of very good pizza with an Italian beer. Then, we were off and running to The Rubi Slipper where we downed a taco and PBR. I probably wouldn’t order a taco at The Rubi Slipper again, instead I’d stick with that green chili smothered hamburger.

Our next destination was Oscar’s Restaurant where we wolfed down excellent tacos with Dos Equis. The owner of Oscar’s tried to give us some free cheesecake, but we were getting full and had one more stop to make so we sadly turned her down.

Our last stop was Calvillo’s Mexican Restaurant, the #1 TripAdvisor.com rated restaurant in Alamosa. Here we were treated to scrumptious sopapillas served with a Fat Tire beer. Entertainment was provided by the bartender, who was a real Tom Cruise when it came to making cocktails, and the tortilla maker, who kept busy rolling out and cooking tortillas for the entire time we were there.

I asked a passing waitress if I could buy a hot tortilla; she laughed and gave me one. Nothing beats a fresh tortilla except maybe a fresh tortilla served with piping hot, extra spicy green chile.

I’m not sure how we were hungry again the next day, but we were and we hit up Campus CafÃ©, our last and final Alamosa dining experience. Campus CafÃ© is ridiculously popular with locals and we were not disappointed.

So there you have it. We ate our way through Alamosa, Colorado and I’d definitely do it all over again.

The Yurt Life is the life for me, a yurt stay in Northern Colorado

Spring is one month away: How to lift your mood during the doldrums of winter