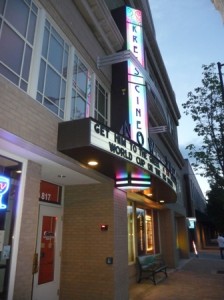 A couple weeks ago I walked into the Kress Cinema & Lounge in Greeley for the first time, and the  first words out of my mouth were, “How did I not know about this place?”

The truth is, despite being in business for several years, I’d never heard of the Kress until the Greeley Chamber of Commerce & Visitor  Bureau (@GreeleyCVB) tweeted me about them during World Cup. The Kress showed many of the World Cup  matches for free on their big screen, and as soccer nut I applaud them.

After Greeley CVB brought the Kress to my attention I found their Facebook page and discovered that at least once a week they have a free movie. I decided to take my husband to their free showing of “Blade Runner – Final Cut,” and that brings me back to my original exclamation. As soon as I walked in the door I was impressed with the Kress. It’s a trendy sort of retro-looking bar that just so happens to have a nicely appointed movie theater too.

On the Friday evening we arrived a musician was playing guitar in the front area of the establishment. It turns out the Kress lounge has live music every Friday and Saturday night. We sidled up to the bar and perused the menu. The food items at the Kress all have fabulous names such as Porky’s Revenge, a pulled pork sandwich, A Fish Taco Called Wanda, a fish taco, a Quesablanca”¦ okay, I think you get it. The drink titles are just as entertaining, but we stuck with beer from Crabtree Brewing Company in Greeley. Beer is $4.50, wine is $7, and mixed drink prices vary.

The Kress bartenders are hip and cool and so are the patrons. I noticed a lot of well-dressed young people drifting in and out through the backdoor. I solved this mystery when I visited the ladies room; a group of hipsters were swing dancing in one of the rooms behind the Kress.

After enjoying our beer we bought soda, popcorn and candy and got our free ticket to the show. The theater snacks are reasonably priced, and to  my delight, the candy comes in retro-packaging. The theater at the Kress is even more impressive than the bar. It’s not large, but not too small. The screen is high quality and the theater itself is well appointed with beautifully restored high ceilings that look original to the building.

There are cozy booths with tables in the back for snuggling or eating.   The room slopes downward towards the screen, and in addition to comfy theater seats, there’s a long, narrow table in the middle of the room where patrons can comfortably sit with their drinks. When the movie started we were happy to discover the sound system was top notch.

The Kress plays new movies as well as classic films. The new movies are often indies, although recently they had the mainstream movie “Get Him to the Greek.” I’m so glad I discovered the Kress Cinema & Lounge. I was impressed and think you will be too.

The Kress is located at 817 8th Street in downtown Greeley. Find them online at www.kresscinema.com or on Facebook here.

Is “Dinner for Schmucks” better than it’s title?
Movie Monday: “The Other Guys” – Wish I’d seen any other movie