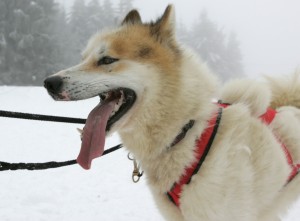 I’ve been a fan of dog sled racing since I was just a little girl. Growing up in the far northern reaches of Washington State – let’s face it, it was practically Canada – there were quite a few Alaska connections around my community. This meant that throughout my childhood I had roundabout connections to the Iditerod, and therefore I never missed the race on television.

Since moving to Colorado in 2000, it’s been on my bucket list to make it to one of the many sled dog festivals that are held in the Rocky Mountains. This February I finally get my chance, not only to fulfill my childhood dream of riding in a dog sled with Dog Sled Rides of Winter Park, but also to witnesses sanctioned sled dog races.

I’ll be attending the Grand Park Dog Days of Winter over Presidents Day weekend in Grand Park, Colorado, just outside of Winter Park.

This is a two-day event, sanctioned by the International Sled Dog Racing Association. Races will offer slots for sled teams of four, six and eight dogs, a three-dog junior division and one and two-dog skijoring, where the mushers, wearing cross-country skis, are pulled by their dogs.

A skijoring clinic will be held on Saturday, Feb. 16 at 1:30 p.m. and people are encouraged to bring their dogs and give it a try. Harnesses and gear will be provided, but you need skis and a willing dog. In addition to the races there will be vendors and other entertainment at the race site.

In addition to the spectacle of the dog sled races, the area will be bustling with activity over Presidents Day Weekend. On Saturday night, visitors can experience Winter Park Comedy Night at Winter Park Resort. Learn more about winterparkcomedynight.com. 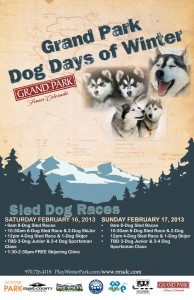