Several weeks ago, Ryan and spent a weekend in Grand Junction. This was a true adventure because we’d never been to Grand Junction before. We’d driven through, but never stopped to smell the roses, or rather, the perfume of wine. 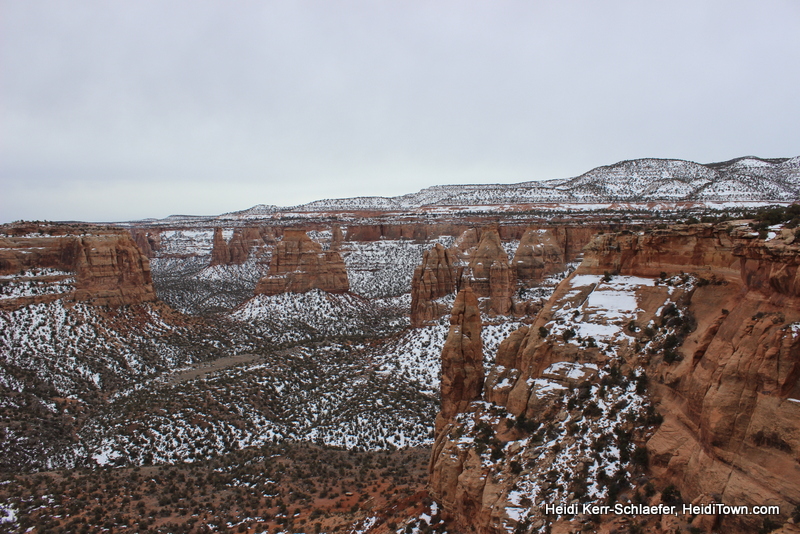 I’m going to highlight our foodie and wine adventures in Grand Junction in another post, but here I want to concentrate on our morning at the Colorado National Monument. First, like many of you, we thought the Colorado National Monument was an actual monument, and we were a bit startled and overjoyed to discover that it is a gigantic park with rock formations that rival those we’ve seen just across the border in Utah. 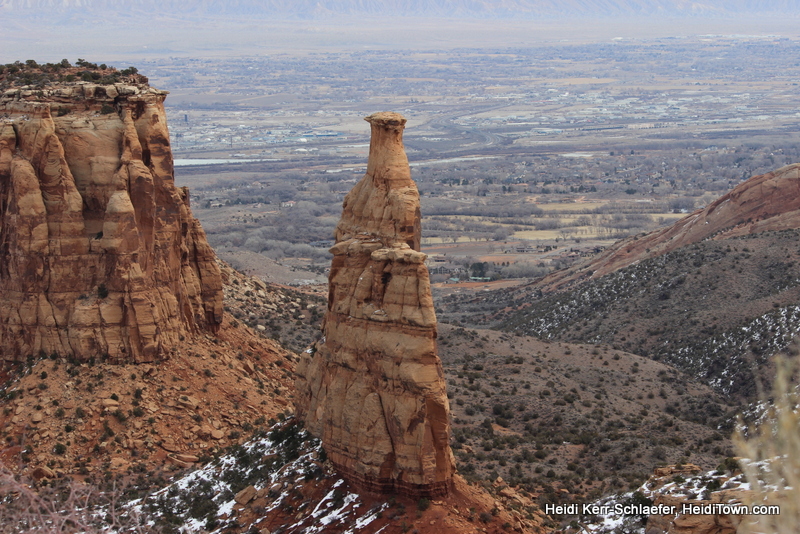 We entered the park via the Fruita entrance on the recommendation of several people, including our helpful hotel shuttle driver from The Clarion  in Grand Junction. Even before we entered the park, we spotted a beautiful bird hanging out in a dead tree. The lighting was such that we couldn’t identify the bird, but we treated the sighting as an omen of good things to come – and it was.

Entering the park through the Fruita entrance is an excellent choice because you are immediately surrounded by spectacular views and huge rock formations that rise unexpectedly from the ground. At first, we were stopping at every overlook to snap pictures and take in the incredible view of the mesas.

By the time we reached the visitor center we were in a cheerful mood. This place wasn’t a tourist trap with some old boring monument – this place was a gem and we felt as though we had just discovered it. Of course, we weren’t the first to discover it, and the people of the Western Slope are well aware of their treasure.

In fact, there’s a movement afoot to give the park National Park status, but there’s also a group opposed to such a move. They don’t want the crowds that come with having a National Park in your backyard, but I think that the Colorado National Monument shouldn’t be a secret. I think it should receive National Park status and be added to our state’s impressive repertoire of national parks.

Inside the visitor center we were greeted by two young female rangers who quickly pulled out photos of the park’s most recent addition; two baby big horn sheep. We knew there were bighorn sheep in the region, but we had no idea that we had come during lambing season, running February through April.

For those who do not know me, I’m a huge freak when it comes to baby animals. Puppies, ducklings, kittens, kits, calves, foals, eaglets, chicks, goslings”¦ if it’s a baby animal of any sort, I’m a fan. So when we found out about the baby bighorn sheep we were determined to find them. 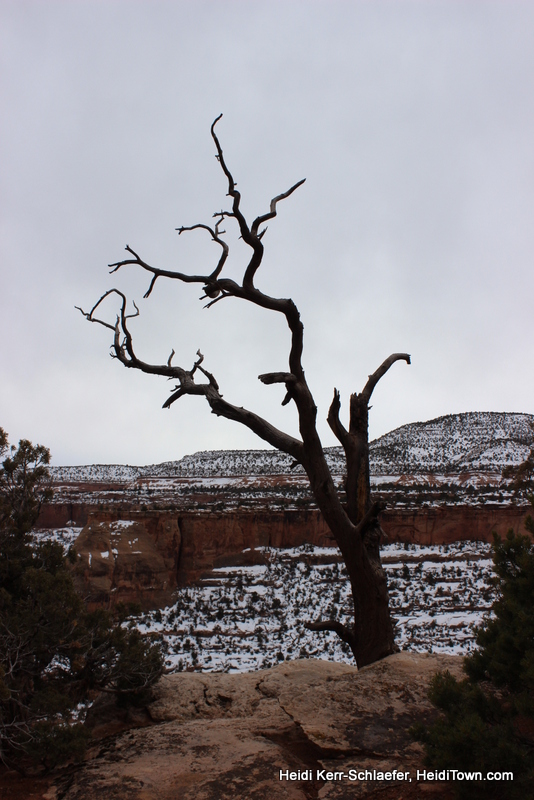 We struck out on a hike with a purpose – my favorite kind of hike. We started from the visitor center down a small and easy trail with enormous views and then veered through the campground. The rangers had given us some useful tips on finding the bighorn sheep.

They like to hang out on the outcroppings above the roads around the park and one way you can tell that they’ve been in a certain location are rocks on the road. They scatter the rocks as they scramble up the mountain. You can often hear the bighorns kicking around rocks before you actually spot them.

The rangers told us we might find them on a rock outcropping we’d driven under earlier, so we backtracked, by foot. Peering through binoculars towards the specific location, at first Ryan saw nothing, but then JACK POT! We had found them. Two bighorn sheep lambs and their mothers, right where the park rangers said they might be.

They were still pretty far away from us, and couldn’t be seen without binoculars, but there they were and we marked the hike a grand success. We snapped some pictures, hoping we could zoom in later to find the little guys.

Back at the visitors center we were accosted by a juniper titmouse. The bird spotted us walking through the parking lot and fluttered over to land on a tree limb directly in front of my face – I could have reached out and touched him. When we told the park ranger of this encounter she said it’s not because people feed them, it’s because the juniper titmouse is a friendly little bird with a big attitude.

The rest of our drive through the park was uneventful. The scenery was still breathtaking but to my disappointment we had no more wildlife encounters. I was hoping to spot a male bighorn walking on the road, as they tend to do quite often.

The Colorado National Monument is a treasure and should not to be missed when visiting the Grand Junction area. Within 15 minutes of Grand Junction, it makes for an easy morning excursion, or you can make it a longer adventure by hiking, rock climbing or camping in the park.

Learn more about the Colorado National Monument HERE.  Check out everything Grand Junction has to offer by going to VisitGrandJunction.com and following them on Facebook and Twitter. 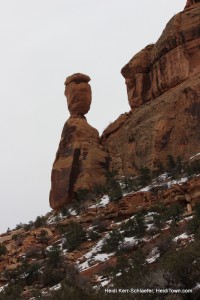 1. Stop at the Visitor Center to see what animals have been spotted in the park recently.

5. Pack a light coat. It can be a bit chilly atop the mesas on a spring day.