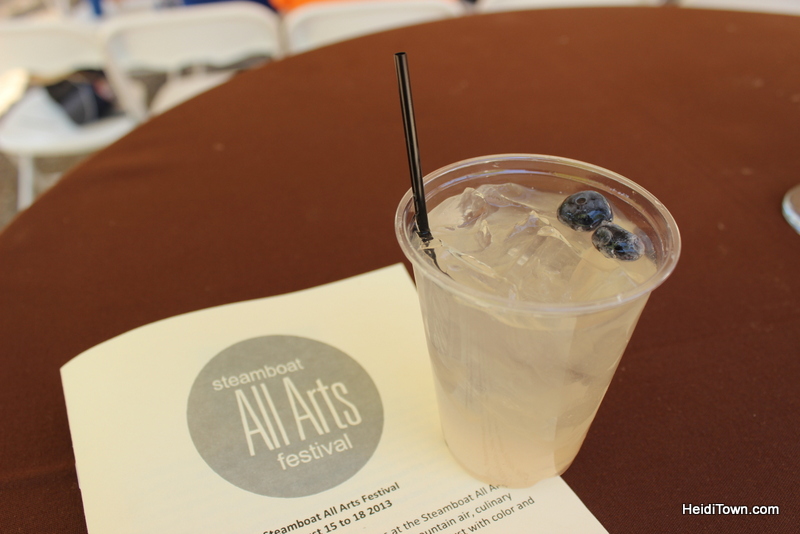 Last month I attended All Arts Festival in Steamboat Springs, and I was unaware of the culinary adventure that awaited me. In its 5th year, this art fest continues to gain popularity. It features all sorts of art, including culinary, which is the subject of this delicious post. In fact, food became the highlight of the weekend, and I don’t think I’ve eaten so well and so healthily on a travel weekend in a very long time.

The first presentation I attended was by Bill Hamil, owner of the Steamboat Meat and Seafood Company. The culinary demonstration zone was set up in the open air next to the Yampa River. A bar was set up in the same area.

This session was already packed when I arrived, so I stood near the back, inhaling the amazing smells in the air. The best part of Kitchen Theater is that after you watch and listen to the chef prepare the meal, you get to taste it. It’s sort of like being a judge on Iron Chef, something I’ve always wanted to do.

Hamil made tuna poke tacos with a wasabi yogurt sauce, topped with spicy sprouts. The flavor combination made my taste buds very happy.

The second day I arrived early for the presentation by Chef Laslow of Laundry Kitchen & Cocktails. Hungry, I had spied the Phenomenal Falafel food tent the previous day, so I ordered a felafel pita and it was phenomenal (and just $7). These guys are looking for a permanent location in Steamboat, and I hope that they find one.

Chef Laslow did not disappoint, plus he brought along Tod “JJ” Johnson, the cocktail master at the restaurant and recent winner of best bartender in Steamboat. I immediately knew this was going to be an excellent afternoon, and it was.

Chef Laslow brought octopus, yes, an entire octopus, while JJ brought along watermelon infused vodka and lemonade. I instantly liked him, and so did the rest of the audience.

Several cocktails later, the audience was indulging in a rich dish of octopus with red potatoes and red onion. Believe me, this was one cheerful Kitchen Theater audience.

After Chef Laslow and JJ rocked our socks off with their culinary and cocktail skills, Chef Fawn Racoma of Sweetwater Grill took the stage. Chef Fawn is pretty much the cutest thing ever, but don’t let that fool you. I’ve eaten at Sweetwater Grill – it’s one of our favorite places in Steamboat – and this lady is a killer cook.

Chef Fawn cooked up her popular steak lettuce wraps. The area filled with the smell of ginger and it was divine. Our mouths were watering by the time she passed out the final product, a beautiful bed of steak with red pepper, carrots, onion and cilantro on crispy lettuce. It was delicious.

Other good stuff I ate in Steamboat Springs:

A spinach salad with loads of bacon at Three Peaks Grill, conveniently located next to Strings.  At just $11, on this pricey menu, it’s a steal.

Dinner of salt cod fritters and cured salmon salad with tomato, salsa verde and argrumato at Laundry Kitchen & Cocktails. Paired with a spicy margarita, I will dream of this meal for years to come.

The most amazing breakfast burrito I have ever eaten at The Paramount, located slope side. There’s something about their green chili here that is really unique and gives this burrito a crack-like appeal.

This trip was sponsored in part by Steamboat Springs Chamber Resort Association.

HeidiTown on the Radio: Colorado this September, Part One
Viewing fall colors via a Colorado train ride