Ryan and I hadn’t been out in the big city since the fall, so when we read that the Colorado Symphony was playing Beethoven, we decided it was time for a Denver date night.

We used to frequent the Colorado Symphony quite often. In fact, for several years we bought concert packages to the CSO, giving us an excuse for a Denver date night every month. The Colorado Symphony has all sorts of subscription packages available, making it easy to pick and choose the number of symphonies you want to attend and which shows.

We started our Denver date night at TAG Restaurant on Larimer Street, an eight minute walk from Boettcher Concert Hall. This restaurant has been on my radar for awhile now and this was the perfect opportunity to give it a try. 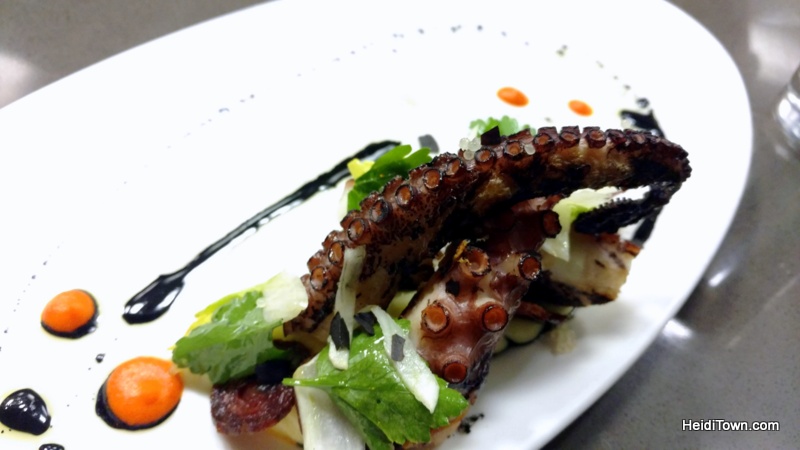 The food scene in downtown Denver has come a long way since we lived in the Mile High City in the early 2000s.

Chef Troy Guard, who opened TAG in 2009, is a big part of the city’s culinary expansion. He has opened a number of restaurants since, and there are still more in the works. Guard’s restaurants elevate food, while still making it approachable, and I think this is why he’s so well-loved by Denver foodies.

TAG isn’t your grandfather’s surf and turf restaurant and there are no pretensions here. At TAG the food is the star of the show.

Our starter was a dish that our server, Tami, believes encompasses what TAG is all about. It’s a flash seared Hamachi served with jalapeño, baby tatsoi, Japanese myoga, yuzu white soy and strawberry pop rocks. You read that right – STRAWBERRY POP ROCKS. I’ve never had so much fun eating sashimi.

We were lucky enough to try several of TAG’s most popular appetizers and Ryan declared, with each bite, that this one was his favorite, although we both agreed that the charred Spanish octopus with chorizo, potato puree, red pepper coulis, squid ink vinaigrette and finger lime won the day.

While there are items such as chicken, duck, lamb and steak on TAG’s menu, we both ordered seafood entrees; miso black cod for Ryan and the salmon special for me. 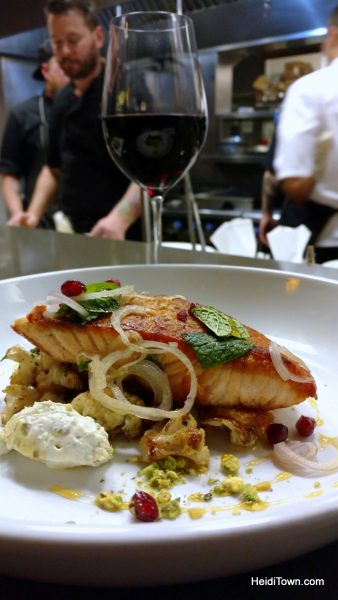 At Tami’s suggestion, I paired my salmon with a pinot noir from Oregon’s Willamette Valley that’s made specially for TAG, called TAG-grity. I wouldn’t have thought to pair fish with a red wine, but the pairing worked beautifully. In reality, I am not a big fan of pinot noir (gasp!), but TAG-grity was very good and I’ve tasted quite a lot of them as my parents live in the Willamette Valley.

Everything is so artistically plated at TAG that I hated to take a bite and mess up the tableaux, but they want you to eat at TAG, and we certainly did.

If you decided to try out TAG, and you should, ask to sit at the back bar overlooking the kitchen. The TAG kitchen team moves like a well-orchestrated symphony and it’s mesmerizing to watch them.

And speaking of symphony, we made it just in time to slip into our seats to enjoy Kevin Puts’ Symphony No. 2 followed by Beethoven’s Symphony No. 9, arguably one of the most well-known symphonies in the world.

If you are intimidated by the thought of attending the Colorado Symphony in Boettcher Concert Hall at the Denver Performing Arts Center, you shouldn’t be. Like most things in Colorado, it’s far from stuffy. Yes, some people arrive dressed to the nines, and you may even see some fur, but you don’t have to be one of the elite to attend a show here.

You don’t even need to be a connoisseur of orchestra music. After all, one can become a fan at any point in one’s life. All you need in order to attend the Colorado Symphony is a desire to listen to music and a nice pair of shoes.

For me, being in the same room as a live orchestra is an other worldly experience. When I close my eyes and listen, it’s as close as I ever come to reconsidering belief in a divinity.

Tickets to the symphony can be obtained for as low as $29, so a night at Boettcher Concert Hall doesn’t have to break the bank.

If you want to impress your partner this Valentine’s Day (or any other day for that matter) take him or her on a Denver date night to TAG followed by symphony. I promise that this outing will earn you so many points that you’ll have some to spare.

Thank you to TAG Restaurant & the Colorado Symphony for hosting us on this evening out in the Mile High City.

Surprise! You Can Afford to Shop in Aspen, Colorado